[German]At this point only a short information in case someone is wondering. In Windows 10 October 2018 Update (Version 1809, Build 17763.55), Windows Defender shows a wrong time for signature updates that are in the future. But this should only be a cosmetic issue.

I mention this here within the blog because there was already a query from a German reader. I received an e-mail with the title 'Strange advertisement on Defender' and the blog reader wrote:

On the [attached] picture you can see a screenshot of the current Win-Defender with strange times of the update.

On the picture the update time is already in the future.

Maybe you have an explanation.

Yes, I had an explanation, because I read several hours before a comment of the kind 'Hello, my 1809 runs also almost without errors. Only the Defender time goes two hours ahead'. Normally I would simply have ignored this comments. But it was obviously 'stored' within the back of my head. And when I got the above reader's question, something rang the bell.

Tried to run a quick test …

I booted the test machine with Windows 10 V1809 and tried to check in Windows Defender the date and time value. After a few seconds I got the message that the 'Threat service' had been stopped and I was asked if I wanted to restart the service. I did and had to wait 10 to 20 seconds until Defender was operational again. The reason is unknown to me, I haven't seen it like that yet.

Then I let Windows Defender search for new updates. These were also found and installed. Then I took the following screenshot, which shows the problem already. 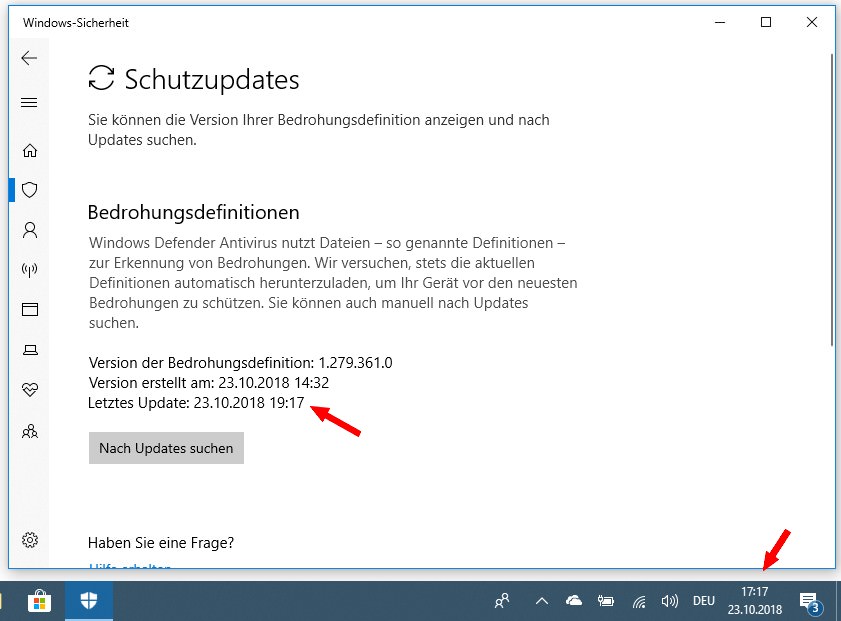 Windows Defender displays an update dated October 23, 2018, at 19:17. However, the time in the taskbar shows the current local time 17:17. Defender's time will therefore advance by 2 hours. If this is only a cosmetic display issue. I don't know, if this will cause trouble with future updates, that's are rejected because of invalid certificates due to the wrong time.