[German]After the release of Windows 10 October 2018 Update (V1809), Microsoft also deployed the .admx template files for Group Policy. However, these are flawed.

The administrative template file (.admx) for Windows 10 V1809 group policy editor has been available since October 13, 2018. I was notified on Twitter as well as from the colleagues of deskmodder.de.

We’ve updated the blog post to include a link to the admin templates (ADMX) for #Windows10 #v1809, which were also released yesterday. If you just want the ADMX, here’s the download: https://t.co/SzJnKdBarv https://t.co/9hQbqpp0yG

The download of the template files from this Microsoft site is available in several languages. 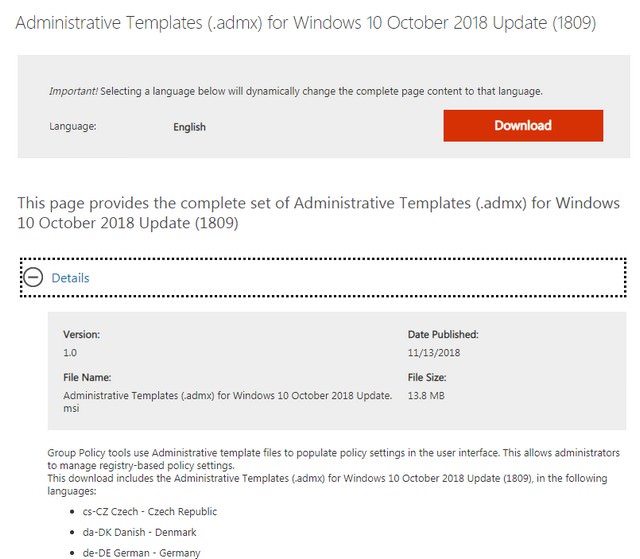 The 18.8 MB msi file installs the .admx file, which can then be used by the Group Policy Editor.

Unfortunately Microsoft made a mistake when packing the installer file – at least for the German edition. Last week I received the following message via Facebook.

In the german MicrosoftEdge.adml for 1809 there are again at least 5 errors….after that it became too stupid for me to straighten them myself. This is now the third time in a row that they mess up.

The Facebook user wrote to me, ‘Funny thing is that the adml in windows 1809 are okay.’ Yesterday’s comment by German blog reader Dietmar on the topic shed some light on the matter. He writes about it:

In the group policy files for download (admx) Microsoft has forgotten to update the adml file, the German translation file, MicrosoftEdge.adml. This is still the file for 1803. I don’t think it ever fitted either.

This means that a lot more to do until Windows 10 V1809 is business ready..

On a tweet from @PhantomofMobile dated November 14, 2018, that the .admx files for Windows 10 V1809 have been released, @Karl_F1_Fan replied as follows.

I hope they have made a better job on the Excel this time. Filtering for Enterprise or Pro only GPOs and the Windows version was not perfectly Fitting as settings were missing or improperly categorized.

There, too, someone is concerned that the group guidelines have been neatly maintained. Tero Ahonen takes a look at the Windows 10 19H1 development branch and its group policies in the following tweet.

This entry was posted in Windows and tagged Edge, Policy Template, Windows. Bookmark the permalink.