[German]Today still a blog post about HP Sure Click, which is shipped by the manufacturer with certain business PCs and should protect Windows 10 systems, but can lead to very unsightly collateral damage.

Hewlett Packard ships HP Sure Click on some of its Windows 10 machines. This program is designed to protect a Windows computer from malware lurking on malicious websites or in common files.

Instead of trying to detect malware, untrusted websites and files are opened in their own isolated virtual containers known as virtual micromachines (VMs). If malicious code is present, these micro-VMs cause the malware to believe that it is running on your computer even though it is actually trapped. 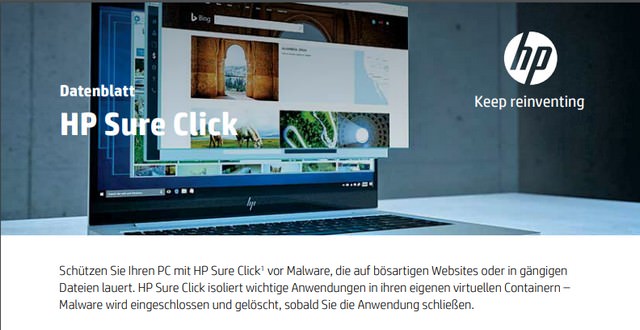 HP Sure Click isolates critical applications in their own virtual containers – malware is trapped and deleted as soon as you close the application. See this HP document (deleted) (PDF) for more details.

The program is (thanks to German blog reader Dekre for the hints) part of the so-called Business PC Security Projects of HP. Dekre wrote in a comment that it was also included in HP’s Client Management Solutions (I didn’t find anything on the page, but this page lists Sure Click). The articles here and here from 2017 describe the partnership between HP and Bromium, the developer of Sure Click. Blog reader Dekre send me also another link to this info page.

Basically, the above description for HP Sure Click reads like a very useful feature. Unfortunately the practice draws another image. For the first time I got in touch with the topic via Blog Reader Dekre. In the German blog post Killt Adobe Acrobat Prof XI Internet Explorer-Favoriten? I wrote in June 2018 about an observation from Dekre. He run into issues with Internet Explorer favorites, and he supposed, an Adobe Acrobat update might be the root cause. Later Dekre found out that it wasn’t Adobe Acrobat that was causing the trouble, but HP Sure Click and its protective function. In a comment, Dekre wrote:

It is a new HP Business PC with Intel processor 7th Gen. HP ships various software preinstalled on these business devices, but the purpose of this software is unknown.

My issues has been caused by a security programs from HP, here specifically HP Sure Click and the browser add-on of this program. After I’ve deactivated this, it reactivated again, when IE 11 is restarted. I had always suspected the program. If you deactivate the services, it won’t work. The respective add-on is still activated. If you have activated HP Sure Click correctly, you cannot choose within this program that it does not install an add-on in IE 11.

Dekre uninstalled the whole program and his issues was gone. So that was the first hint that there could be trouble with the tool. I did some more research on this blog post.

If you search a little on the web, you will come across some hits, where there are reports of trouble with HP Sure Click. In this article (deleted) in the Spiceworks Community from September 2018 a user writes about bigger issues.

The user writes that you can set a whitelist, but you can’t really configure the tool. In January 2018, the Windows update KB40556892 and Sure Click collided. HP has this forum post and this forum thread on the topic.

The issues continue with HP Sure Click, as can be seen in the HP document HP Sure Click Advisory – HP Sure Click Does Not Work After Certain Microsoft Security Patches Are Applied. The document was first published in January 2018 and was last updated in September 2018. The message: Practically every update under Windows 10 leads to collateral damage with Sure Click. HP meanwhile indicates the following updates as problematic.

The updates for Meltdown and Spectre have probably deprived HP Sure Click of its ‘business foundation’. As a result of these updates, an error message appears in various scenarios stating that HP Sure Click has not been initialized. HP has provided an updated version of Sure Click on the site. In the meantime, this HP document (as of November 14, 2018) has been released, which again addresses the issue of an ‘HP Sure Click Initialization Error’.

This applies to all HP computers of the following models on which HP Sure Click is installed in a version prior to 4.1.0.5714.

and running one of the Windows 10 versions listed below.

As a solution, HP proposes to install the HP Sure Click version 4.1.0.5734 provided on the site. This means: With every update of Windows 10 you have to expect issues with HP Sure Click. Then you have to wait for an update of the software and install it. Given these issues, I’d rather uninstall HP Sure Click from the machines using the Control Panel.

1 Response to Issues with HP Sure Click in Windows 10