[German]The cumulative update KB4467682 for Windows 10 Version 1803, released at the end of November 2018, breaks custom start menus in Windows 10. Here some information to the topic.

What is a custom start menu?

The layout is configured using XML files. So you can configure a computer with a default start menu, export the layout to an XML file and import these settings on other machines. Microsoft has described in this article how to customize the start menu using group policies. The Microsoft article Customize and export Start layout describes how to apply a customized start menu to different Windows 10 machines.

Here's another small bug we stumbled across. But they are not the only ones. Uninstalling patch KB4467682 helps. Custom layout works again.

Markus then pointed me to the Technet forum article 2018-11 Cumulative Update KB4467682 breaks custom Win 10 Start Menus, where the problem is described. The administrator posted the issue works for a non-profit organization that relies on Windows 10 Pro for cost reasons. In order to prevent Crap-Ware from constantly popping up in the start menu of the users, he used the Microsoft contributions linked in the above text to create a custom start menu.

Hi, I work for a non-profit as part of the IT Dept, we run Win 10 Pro throughout our facilities, since we can't afford Enterprise. As part of that, to avoid the crapware constantly popping up in the start menus of my users, I used the procedures found here and here to create a custom start menu applied to every PC using Group Policy. It has worked beautifully for a number of months now on over a hundred PC's.

Group policies allowed a custom start menu to be rolled out to over a hundred PCs. This has worked very well for months. The following image shows the six (pinned) tiles attached to the Start menu. 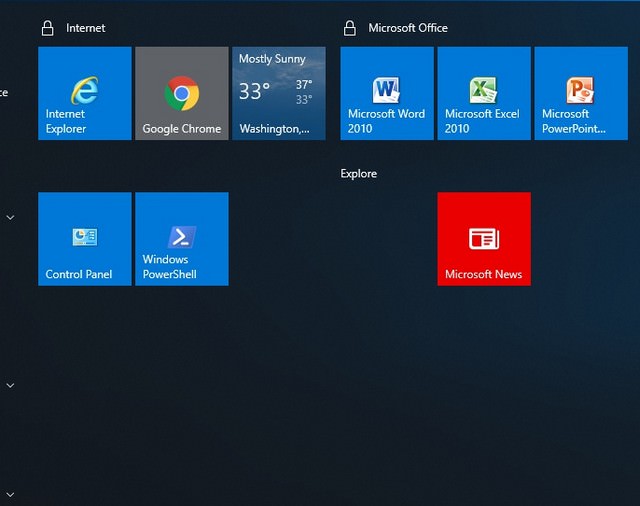 After KB4467682 was released, this configuration of the start menu did not work anymore. The user writes:

After KB4467682 was released, I've noticed that when a user logs into a PC they haven't logged into before, instead of this 6 pinned and locked icons at the top of their start menu, they now only have one. All of the Win32 icons now no longer show up, only Provisioned apps.

After the update installation, the user noticed that the six pinned tiles for apps had disappeared. Only one provisioned (store) app will be pinned as a tile in the start menu.

All Win32 icons are no longer displayed. The screenshot above shows the changed start menu. The above screenshots are taken from the MS Answers forum post 2018-11 Cumulative Update KB4467682 breaks custom Win 10 Start Menus. The same effect is described there. The error has been confirmed by several users. Within the forum thread it is speculated, that the bug could be caused by the changed Fluent design. After uninstalling the update KB4467682, Win32 apps are displayed again in the user-defined start menu.