[German]Windows 10 May 2019 update does not install on Macs that were introduced before 2012. The same applies to newer Apple Macs that have older versions of Apple’s Boot Camp software or Windows Support software drivers installed.

Boot Camp is Apple’s software that lets you install and boot Windows on a Mac. Apple describes the requirements for installing Windows 10 on Boot Camp in this document. This Apple document provides more information on this topic. Experience from the past shows that there are always compatibility issues, when a new version of Windows is released that cannot be installed under Boot Camp. This is exactly what happened again with the Windows 10 May 2019 update.

Microsoft has documented an issue

Microsoft released the support document Updating to Windows 10, version 1903 on Apple Mac devices introduced before 2012 or newer Mac devices with older versions Apple Boot Camp or Windows Support Software drivers installed, describing issues with Macs during updating to Windows 10 V1903. If users attempt to install the Windows 10 May 2019 Update feature update on Apple Mac computers, this may cause an error in the upgrade wizard. The Upgrade Wizard detects a compatibility issue and reports it:

“Mac HAL Driver – machaldriver.sys: Your PC has a driver or service that isn’t ready for this version of Windows 10.” 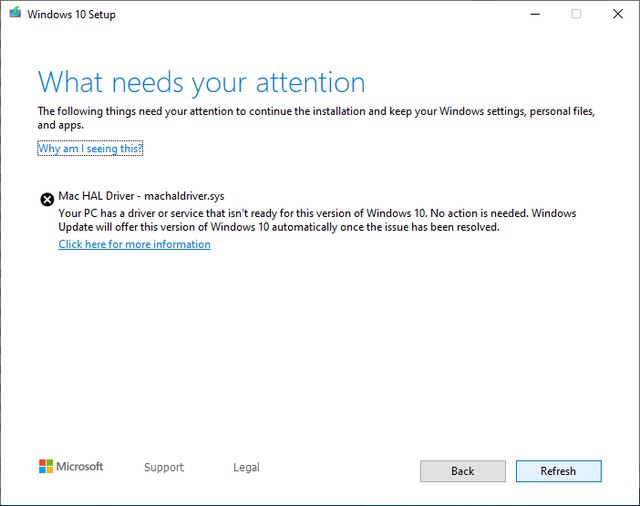 The picture above shows the English message of the setup wizard. The wizard reports issues with the Mac HAL driver (HAL = Hardware Abstraction Layer) machaldriver.sys on the Mac and aborts the upgrade.

Which devices and drivers are affected?

Mac devices prior to 2012 or newer Mac devices with the older Apple Boot Camp or Windows Support Software drivers have a compatibilty hold in place and are unable to update to Windows 10, version 1903.  Specifically, devices with MacHALDriver.sys dated September 24, 2011 01:57:09 or older in Windows\system32\drivers are affected.

Are there workarounds? What can I do?

Microsoft proposes to update the Apple Boot Camp Windows Support Software driver. Then you may be able to upgrade to Windows 10 version 1903. The support document states that you may be able to search for updated Windows support software under macOS. This should be possible in the Apple menu under App Store. If something is found, then install all available updates.

You can also try the instructions in the Apple Support article here to fix existing installation issues. If that doesn’t help, just wait and see. Microsoft is working on solving the problem. (via)