[German]Windows 10 stops to auto back up copies of the registry into the RegBack folder since version 1803. Microsoft recently announced this within a support article.

This is a supplement to a topic I thought was generally known. I remember my blog post Windows 10: No RegBack backup in V1803/1809 of November 5, 2018 where I described that issue. Here are some excerpts from my older post an an explanation provided by Microsoft including a workaround on how to get back the old behavior.

Windows contains a feature that creates a backup copy of the registry files at regular intervals. Windows uses a folder C:\Windows\System32\config\RegBack in which the operating system can cyclically store copies of its registry files. There is a task in the branch Microsoft -> Windows -> Registry in the task planner for this purpose. 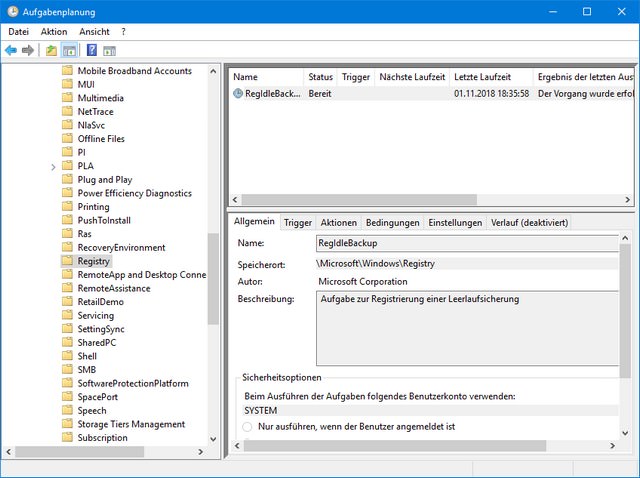 This task cyclically creates various files in the RegBack folder. I checked this under Windows 7 times in an administrative command prompt. This looks like this: 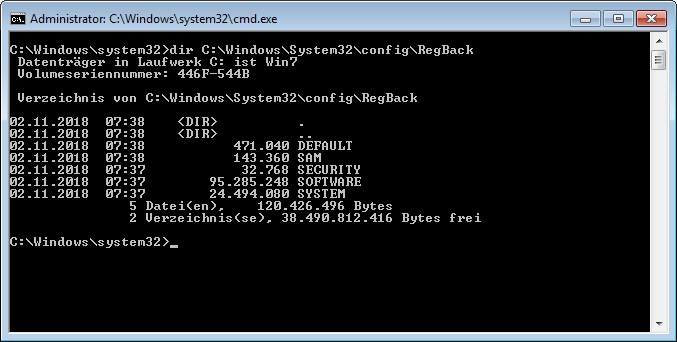 The system-wide valid structure files of the registry (hives) can be found. In SOFTWARE, for example, all installed programs can be found and under SYSTEM the registration keys for the system are stored.

This feature should allow you to repair a Windows that is no longer starting due to damaged registry hives. In the past, however, there have been problems with the feature from time to time.

RegBack is missing since Windows 10 V1803

In Windows 10 Version 1803/1809 the registry backup task doesn't work anymore. If you inspect the RegBack folder, you will see, it is empty, although there is a backup task. 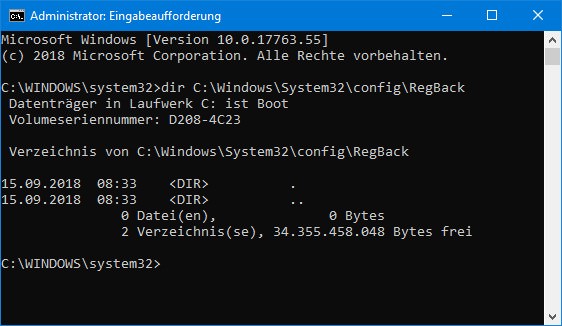 Even a manual execution of the task to backup the registry hive files does not change this. I then searched the Internet – this forum entry in MS Answers from June 7, 2018 complains about this effect already on Windows 10 V1803. A user writes that the files would have a size of 0 kb. Other users confirm these observations. It is assumed that Microsoft silently 'killed' the registry backup from Windows 10 V1803. In version 1809 the folder is even completely empty.

This tweet from Vadim Sterkin @vsterkin also already discussed this observation for Windows 10 V1803, and some people try to bring it to the attention of the Microsoft developers in the feedback hub or via Twitter.

#Windows10 1803+ no longer creates backup copies of the registry

This change is intended by Microsoft and is intended to reduce the footprint of Windows 10 with respect to the total size of the occupied disk space. To restore a system with a corrupted registry hive, Microsoft recommends that you use a System Restore Point.

However, I consider this advice to be a joke of history and wonder what kind of weed they smoke in Redmond. First of all, the 'footprint' caused by the hive files is small compared to the bloatware that Microsoft pumps onto the systems with useless apps and features. But the kidding can be increased – because for quite some time each feature update deactivates during the system recovery feature including automatic creation of recovery points.

How to force legacy Registry backups

If you want to reactivate the behavior of the legacy backups from older versions of Windows 10, you can configure this via the following registry entry: :

Set the DWORD value EnablePeriodicBackup to 1 and restart the computer. Windows saves the registry in the RegBack folder when the computer is restarted and creates a RegIdleBackup task to manage subsequent backups. Windows stores the task information in the Scheduled Task Library in the Microsoft\Windows\Registry folder. The task has the properties shown in the following figure: