According to netmarketshare.com, if you look at the distribution of Windows versions on the desktop, the following picture emerges: 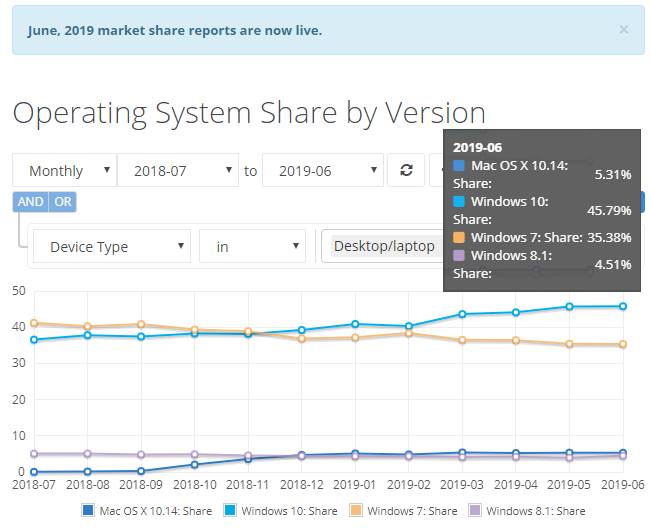 The figures in brackets are from the end of April 2019 (see article from May 2019). The whole thing shows that Windows 10 hasn’t really grown much in recent months and Windows 7 still runs on more than a third of all desktop systems. What is surprising is that Windows 8.1 even managed to grow slightly. This allows the message that people are massively refusing to switch to Windows 10.

Will be there chaos in companies and authorities?

The chart above shows that both the user community and Microsoft have a massive problem. Only 6 months to change and still more than 1/3 of the machines are still running on Windows 7 – not a good situation.

I got figures from Germany, where authorities plans to switch 78,000 clients to Windows 10 till end of November 2019. Although this program is running since months, the deadline comes to early. It seems that we will see a lot of unpatched Windows 7 systems in 2020.

In general, the IT landscape in companies and public authorities is already becoming fatally dependent on Microsoft and is putting data protection at risk. MS Power User is wondering whether the voting machines in the USA will continue to run with an unpatched Windows 7 in 2020. German data protection authorities sees that Windows 10 and Office365 are violating the GDPR.

For companies, Microsoft has announced an extension of support until January 2023. The whole program is only intended for paying companies using Windows 7 Professional and Windows 7 Enterprise (Windows 7 Ultimate is already dropped). And companies will only receive Windows 7 Extended Security Updates (ESU) if they have a volume license agreement (get a discount with Software Assurance). I had reported in the blog post Wow! Windows 7 get extended support until January 2023.

The prices are also quite steep, as I explained in the blog post Prices for Windows 7 Extended Security Updates till 2023.

How do you handle this?

In a nutshell, I would describe the whole thing as a ‘modest situation’. Nobody really wants Windows 10, but Microsoft is dropping support for Windows 7 soon. If there is not another big trick to install the security updates for the customers of the ‘Windows 7 Extended Security Update (ESU)’ program on other clients, you have to find a solution.

The idea here is to run castrated and hardened Windows 7 VMs under Linux as a host. But I’m not quite there yet. A change to macOS is out of the question for me. And if I use Windows 8.1 as an interim solution until 2023, I don’t know. I could still use Windows 10 Enterprise LTSC, but somehow it’s time to get out of the pure dependence on Microsoft.

How do you deal with the end of Windows 7 and Server 2008 / R2 in private and corporate environments? Have you been migrating to Windows 10? Has this step already been taken? Do you rely on the LTSC version of Windows 10 Enterprise, or is Linux now coming into the game?