[German]September 2019 has just begun, and the figures for the operating system share on the desktop are available for the end of August 2019. Here is a look at the figures. 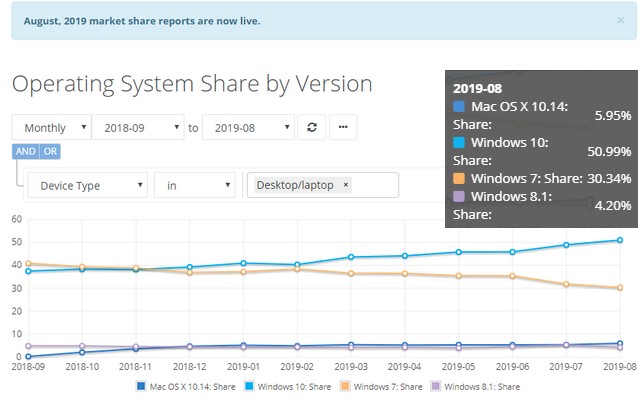 In the analysis of the share by operating system version, NetMarketShare shows the following figures for the desktop operating systems at the end of August 2019 (see figure above):

If statistical fluctuations are taken into account, almost all have remained the same.

Even if the figures fluctuate only slightly, it can be regarded as statistical uncertainties, at least in my eyes, interesting conclusions can still be drawn.

You can summarize the above data in a few short sentences. Even just before the end of Windows 7 support Windows 10 didn't overtake the desktop. Since the beginning of 2019, Windows 10 has only grown by around 10%, a sign that Microsoft's new operating system is not really fit with user requirements. Or in brief: Six months before Windows 7 End of Life Windows 10 isn't at 80%, and Linux is far away from 'it's long year propose' to overtake the desktop.

And another thought that has just come to my mind. Apparently most people don't really miss anything with Windows 7 and would like to continue using it. Of course, the End of Life date was announced at the release of any previous Windows versions, including Windows 7. It was also a fact for a long time: Windows gets 10 years of support, because in the meantime there was a newer and mostly better OS alternative from Microsoft.

But currently we experience that million systems, which works well, are simply destroyed in such a way, although Windows 7 of the functionality is sufficient for many purposes. Microsoft could not score with Windows 8 and Windows 8.1. And with the Windows as a Service approach of Windows 10, this insanity continues.

Or say it other word: The software industry is mutating due to its update cycles into one of the biggest capital destroyers and eco-pigs of the planet. A few days ago, I realized once again that the IT development driven by computer specialists and marketing – at least in the area of operating systems – don't meet the requirements of industrial users. Welding machines, laser cutter or other mechanical tools, plants in the chemistry and process or steel production plants, diagnostic units in industry and medicine etc. are sometimes projected for a life time of 10, often even 20 to 40 years. But the Windows systems used there for supervisory are lasting 10 years (and with Windows 10 just 30 months in best case). A revamp in this environments is in most It's a mis-fit both from an economic and from a safety point of view. In terms of sustainability this could not be the way of our future. We should start, thinking about that.