[German]In Windows 10 May 2019 Update (Version 1903), Microsoft has introduced some update control features. In connection with update KB4512941 I noticed some inconsistencies. Therefore I summarize some things, associated with the question whether someone can confirm the observations.

First of all: This is only about people who use Windows Update to provide patches, WSUS & Co. are left out.

In Windows 10 Version 1903, Microsoft has included two options for controlling updates in the Windows Update Client. Starting with this version of Windows, Microsoft offers users the option to defer quality updates by 5 x 7 days (35 days) in all versions. 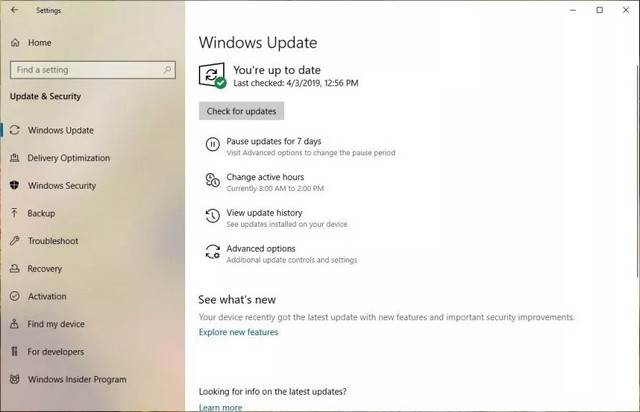 n Advanced options an option to pause updates from the screenshot shown below are visible. Currently I have this screenshot only in German – but you can see the list box to select a date until updates are paused. 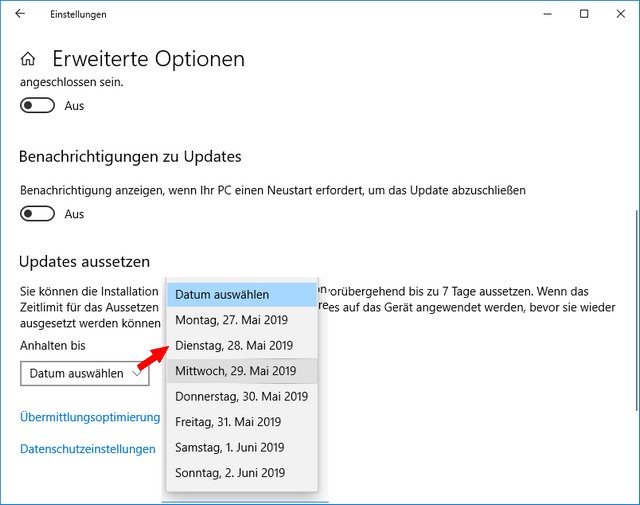 Starting with Windows 10 May 2019 Update, Version 1903, Microsoft provides users with the ability to defer quality updates by 5 x 7 days (35 days) in all versions. This is positive, I had described this in the German article Windows 10 Mai 2019 Update mit Update-Kontrolle. At the same time Microsoft has introduced a second, positive feature. Feature updates can be postponed by the user until shortly before the end of the support period.

To start the installation, click to the Download and install now hyperlink shown in the above dialog box. All in all a paint solution and documented by Microsoft (see my blog post Windows 10 May 2019 Update brings back Update control).

Is there control for optional updates? 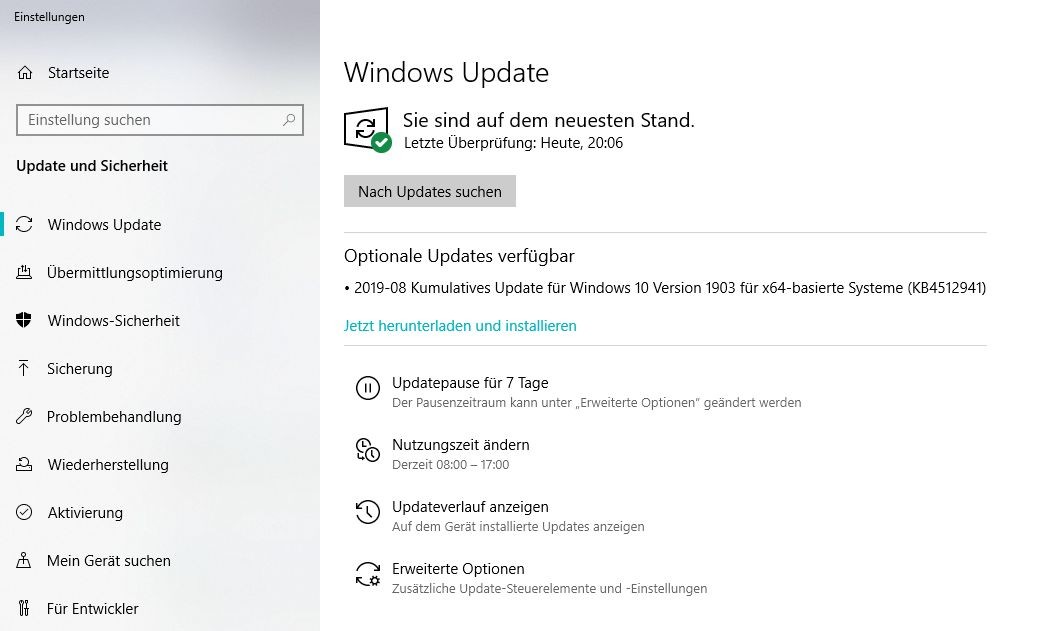 Update KB4512941 is optional and is not automatically downloaded and installed by Windows Update if the user seeks for updates. The user must explicitly initiate the download via the Download and install now hyperlink.

I had already mentioned it within the blog post Windows 10 19H2: What could change. The background could be that Windows 10 19H2 is rolled out as an ordinary update on machines with Windows 10 version 1903 (only older builds get a feature update). So Microsoft had to implement a mechanism that allows the user to defer the update. However, I don’t know of any Microsoft document that explicitly describes this.

I actually had to uninstall the KB4512941 update twice. The first time I installed KB4512941, I had started the search for updates myself and clicked on Download and install.now. After that I noticed the high CPU load. […]

Because of the CPU load I decided to uninstall the update anyway. After the restart the KB4512941 was downloaded and installed automatically.

This is of course bad what Microsoft has implemented. People then had to do this:

To permanently block the installation of the update, Windows 10 Home will not get around using the wushowhide.diagcab (KB3073930) blocking tool.

How exactly this works is described in the blog post How to block Windows 10 updates. But I got reader feedback, that the tool didn’t find the update package.

I myself came across the curiosity number 2 when I wanted to install the update KB4512941 on my test machine. I was not offered the possibility to download the update via hyperlink. 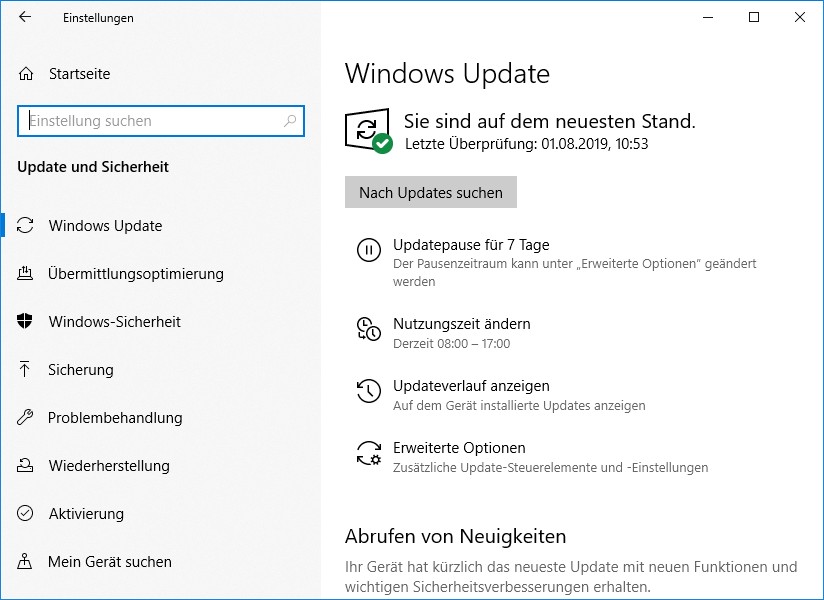 When I opened the Windows Update page, I was not offered any updates (see picture above). Then I offered to search for optional updates so that the optional update could be offered. This seemed to have worked, but I was perplexed to find out that I was offered the following display. 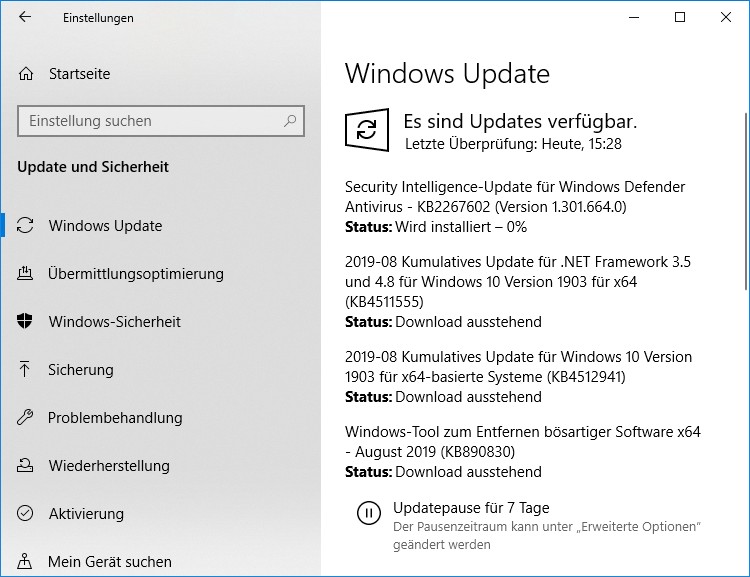 According to the screenshot above, the optional update KB4512941 was downloaded and installed without further user action. So nothing with Download and install now. However, I have to note that the test machine was in the release preview ring at that time.

The latter two peculiarities raise questions from my point of view. Does the update installation behave differently when I’m in the release preview ring? Or is Microsoft once again doing A/B tests with the optional update KB4512941, so that only some people get the option to trigger the download of the update via hyperlink?

The latter option would explain to me why so many users were suddenly caught cold by the Cortana/search bug. Also the observation that this update installs immediately after a one-time installation is cheese. Would it mean at the end of the day that the process that Microsoft programmed to install the update produces different results? Hence the question: Has anyone had similar experiences and can this be confirmed?