There is a thread at reddit.com, where a user wrote 'Cannot run VMware WS Pro 14 after KB4517211'. He posted the following screen shot. 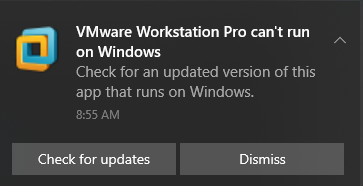 One user wrote, that it has something to do with changes in Hyper-V and may be present since the release of Windows 10 version 1903. Maybe the patch changes something in kernel isolation. We have this issue also in Windows 10 Version 1809. Other users has confirmed this issue. There is also a thread at VMware forum, where this issue has been discussed.

After installing this Windows update "KB4517211" VMWare workstation 12 no longer starts. Had to delete update….

We got the same issue but I don't think that it is a good solution to just remove this update. Is there any other known fix for this issue?

There is also a Microsoft Answers forum thread about this issue. The issue affects several versions of VMware workstation installed on Windows 10 Version 1903. At tensforum.com a user describes a workaround for VMware workstation 14. To do this, unzip the file sysmain.zip and copy it into the folder:

Use the steps are described in the forum. This is because Microsoft can block the execution of applications or drivers via the sysmain.sdb file. The sdb file it provides does not block VMware. Update: See the comment below, there is the possibility, to use the Compatibility Administrator Toolkit to re-allow VMware workstation. But I got reports from users, that the file sysmain.sdb is write protected – so you need to overtake the ownership. Also updating to VMware workstation/Player 15.5 solves that issue. And some users found out renaming vmware.exe to vmware1.exe enables older versions again. Addendum: VMware has issued a statement for this topic.

From what I've heared is, that Microsoft enabled some Hyper-V virtualization feature for a Windows 10 feature, which may conflicts with the hypervisor of older VMware versions. So the update sets a compatibility block. Unfortunately I forgot the details about the exact reason and can't find the link, where I read (that) suspicion. On the other hand, users who are removed the block has been able to run older VMware products again.