[German]A bug in Windows 10 is currently (since the weekend of November 9, 2019) unsettling users who use USB storage devices. Instead of a USB drive, the Explorer now displays a generic device icon. Here is some information about the problem.

I got aware of the issue through this comment left by blog reader John Doe within the discussion area of my German blog (thanks to user John Doe for the hint).

After reading the comment, I've tested the behavior on two systems with Windows 10 version 1903 with two USB sticks and made an interesting observation. When I inserted the first USB stick into one of my test systems, it was correctly recognized and displayed with a name and an icon for a drive in Explorer. 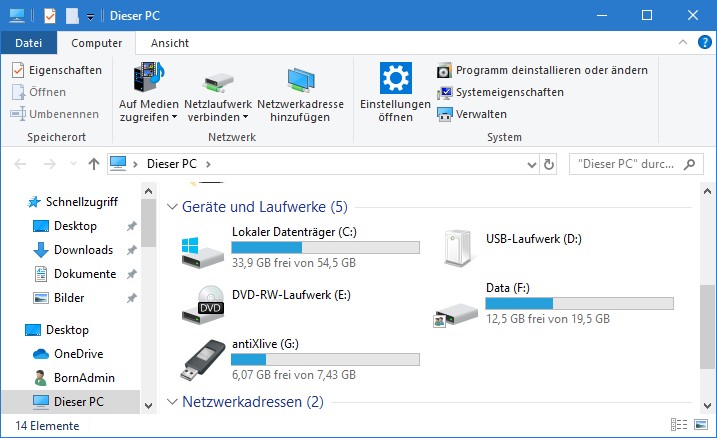 In the above screenshot this is drive G: named antiXlive. But what is already noticeable: The USB drive D: is displayed with a generic symbol in the form of a stylized computer. The drive had no media inserted on the machine, so it is hidden. I then unplugged the USB stick and plugged it into a second test machine and opened the Explorer. There the USB stick was already displayed with a generic drive icon (see image below). 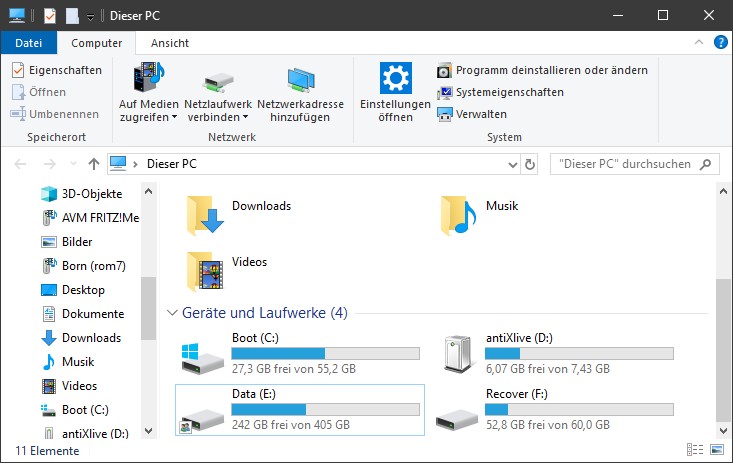 Then I used a second USB stick to on the first test system with Windows 10 Version 1903 and plugged it in. First a proper icon for this device was shown. But after a few seconds the generic drive icon with a stylized computer appeared. So I ejected the USB stick and tried the 2nd USB stick. But both USB sticks was now be displayed with a generic drive icon in Explorer. In the screenshot above, it is drive D: labeled antiXlive.

Something happened with the USB drive detection and Windows 10 V1903 shows a faulty device icon. 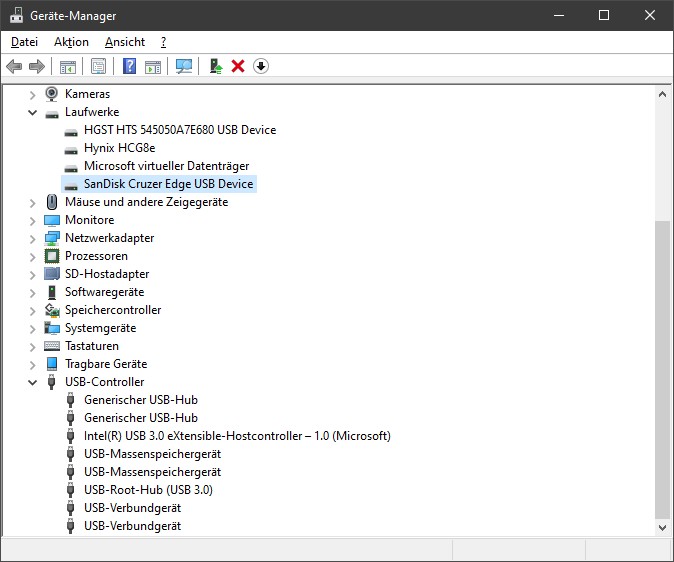 I have inspected the relevant branches in the Device Manager (see image above). The USB stick is displayed correctly as SanDisk Cruzer Edge USB device and in the USB controller branch I can't find anything conspicuous.

Blog reader John Doe has pointed out several hits in the Microsoft Answers forum in his commentary (here, here and hier). What all users have in common is that the wrong (generic) device icon is suddenly displayed in Explorer. One user wrote:

As the title stated, all of my USB drives shows with a "generic device icon" in windows explorer, and when im about to remove my device it shows as "remove "device"", when I plug the device it shows the normal drive icon for a split seccond and then changes to a generic icon, which it doesnt affect the performance of my drives, but makes me suspect that something is wrong on my computer while detecting my usb devices.

PS: Most of my usb drives are made by kingston and it normally shows as "Data Traveler x.0"

The  MVP colleague tried to assist this users, and suggest in step 4 to roll back driver settings (which helped in this case). From what I understand, Greg Carmack has tried to give an explanation in this thread (he mentioned that 'MS changed the default away from Safely Remove' may be the case).

Based on Greg Carmack's explanation, that back in April 2019, Microsoft changed its policy for handling removable media (USB storage) and that may be the cause for the 'changed icon' – I tried to change that policy. Microsoft has posted this support article on the subject, and I reported this change in the blog post Windows 10 V1809: Changes removal policy for USB media with steps to on how to change the policy back to the previous behavior.

After I've changed the drives eject policy, I ejected the USB stick and plugged it in again. In fact, a proper drive icon for the USB stick appeared in Explorer shortly afterwards. When I wrote this article and went back to my test machine, the generic symbol has been displayed again in Explorer. So changing the policy didn't help on my test systems.

So it's my conclusion: It has nothing to do with the chanced device policy (I've doubt this, due to the fact, that this behavior just occurred, but the policy change has been there since April/May). It's simply a bug! I don't know, which update is responsible – possibly the cumulative update KB4517389 rolled out on October 8, 2019 (see Patchday Windows 10-Updates (October 8, 2019)).

Addendum: Got a feedback from my German blog readers. It seems that the issue also hit users of older Windows 10 builds, and also users of Windows 8.1 and Windows 7 as well. It seems, that the icons are getting downloaded (erronously) from Microsoft for 'new devices' (something with 'download user defined icons …' in extended device settings in control panel).

Addendum 2: This is also the hint given from Miguel Simões_PT within this MS answers forum thread – cite: '

This problem didn't come from the latest CU. It's a server side problem. Every time a device is plugged in, it requests metadata from microsoft servers about the type of device , name, model, etc. Opening the window "Devices and printers" seems to be what triggers the bug.'

Or has anyone seen the bug on older Windows 10 builds? I will try to point Microsoft's software engineers to this article, in the hope, that they will fix this issue.

Addendum 3: Bleeping computer has an interesting addendum to this article describing the location of the metadata cache. But I wasn't able till now, to revert the broken icons back.

This entry was posted in issue, Windows and tagged issue, USB media, Windows 10. Bookmark the permalink.