The Trend Micro Anti-Threat Toolkit (ATTK) allows users to run a malware scan on a Windows system. It is not a regular antivirus solution, but a tool that you download and run on your system if you suspect an infection. 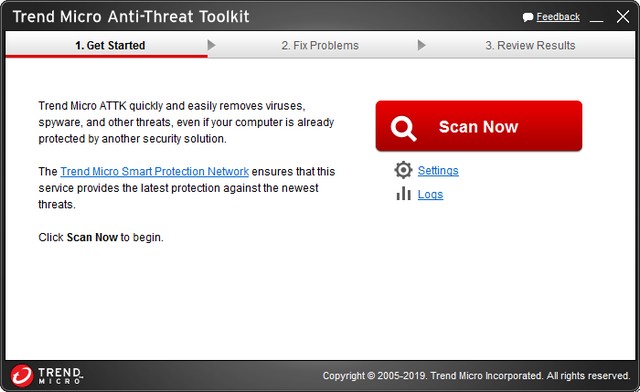 On October 21, 2019, Trend Micro issued this security warning on the CVE-2019-9491 vulnerability. The Anti-Threat Toolkit (ATTK) in Windows version 1.62.0.1218 and earlier has a Remote Code Execution (RCE) vulnerability.

The problem: Vulnerable ATTK versions could allow an attacker to store malicious files in the same directory. Since the tool requires administrator privileges, this can lead to arbitrary remote code execution (RCE) when the ATTK is executed.

In October 2019, I reported about this in my German blog post Sicherheitsupdate für Trend Micro Anti-Threat Toolkit. Trend Micro strongly recommended that users upgrade to the latest version as soon as possible. The tool can be downloaded here in the most recent build for Windows.

Shortly after issuing the security warning, security researcher Stefan Kanthak contacted Trend Micro by e-mail (with a copy to me) and pointed out that the vulnerability was unfixed. Now that a month have passed, I publish excerpts from the mail:

findstr and REG are called without file extension and without path
(although BOTH are well-known), so CMD.exe runs
findstr.com/findstr.exe/findstr.bat/findstr.cmd and
REG.com/REG.exe/REG.bat/REG.cmd from its “current working directory” “TrendMicro AntiThreat Toolkit\HC_ATTK”

The missing path and extension are BEGINNER’S error #1.

This UNPROTECTED directory is therefore writable by the unprivileged
user who can place a rogue findstr.com/findstr.exe/findstr.bat/findstr.cmd
and REG.com/REG.exe/REG.bat/REG.cmd there … and gains administrative privileges!

Additionally an unprivileged attacker can add arbitrary command lines to
the UNPROTECTED batch script batCollector.bat between its creation and
its execution, or replace it completely.

In a nutshell, Trend Micro has not fixed the original vulnerability and puts Windows users with its Toolkit at risk.

A month has passed since the October Security Advisory and the Trend Micro update. Trend Micro has confirmed they received the mail from Stefan Kanthak, so the manufacturer knows about the problem.

Has Trend Micros fixed the vulnerability? 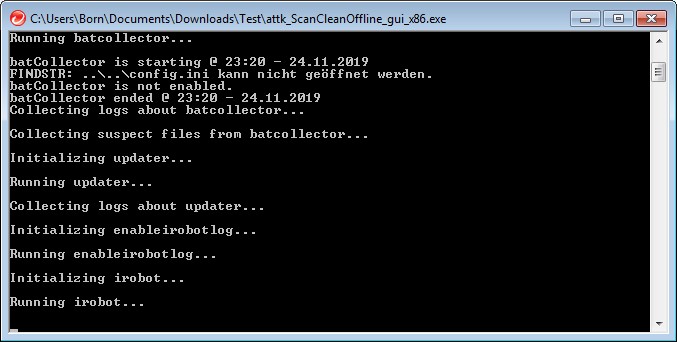 I executed the .exe file in a test environment (provided by Stefan Kanthak). This shows if a program calls DLL files in the path when starting or executing. In this case the test bed shows a warning dialog with further details. 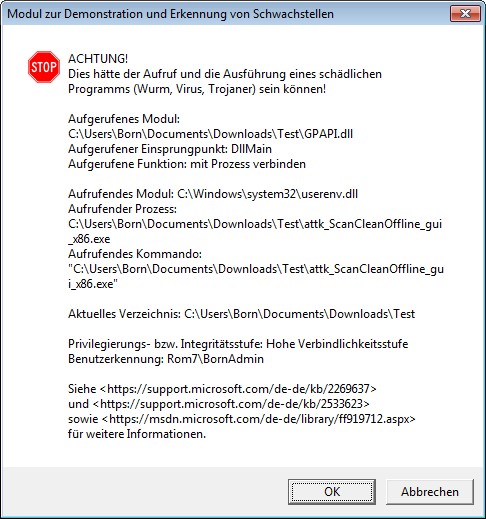 The above screenshot already shows such a warning, where the file GPAPI.dll was called by the toolkit via another DLL. Instead of executing the DLL from the Windows directory, a DLL from the test bed (which could be infected) was called. The dialog box shows that the calls are executed with high privilege and integrity levels. So the DLL can do everything an administrator is allowed to do. This is not the only warning now – if you close the dialog box,  more warnings about other DLLs like crypt32.dll etc. will be shown.