[German]Exciting prognosis, which has just fallen into my hands. Dean Hager, CEO of the software provider Jamf, has given some forecasts for innovations in 2020. One is that we will see a mass migration from Windows to macOS. I found this so interesting that I made a small blog post about it.

The “next big thing” is already waiting around the next corner. That’s nowhere more true than in the tech industry, where a look at the recent past is often enough to predict the future, says Dean Hager, CEO of software provider Jamf. In this news release (German), he looks at four developments in 2020, one of which I’ll pick out.

I had discussed it several times in articles here in the blog. On January 14, 2020, Microsoft ended the support of Windows 7 for the mass of users. Private people got to see this nag screen and an end of life notification recently.

There are no more security updates for the masses – only companies can still book the ESU program. Microsoft does offer extended security updates (ESU) until January 2023. But even with ESU there is no helpdesk support and no more regular bugfixes or patches. The price for the ESU program starts at about 70 Euro and doubles every year (see links at the end of this article).

Still millions of Windows 7 devices in use

Currently, however, there are still millions of devices running Windows 7. In the article Operating system/Windows Market Share (December 2019) I discussed the latest figures from netmarketshare.com. Windows dominates the desktop systems market with 86.84%, while macOS comes to 11.9%. 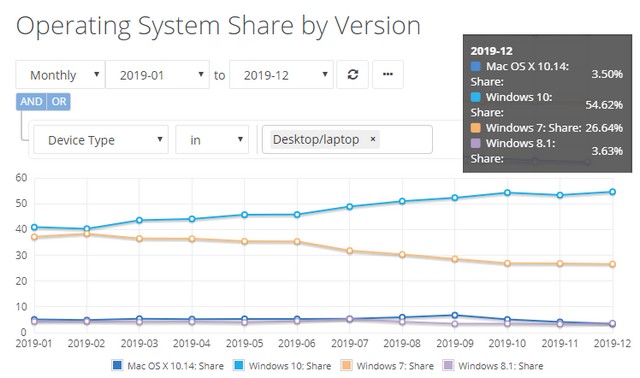 But Windows 7 still has a ‘market share’ of 26.64% on the desktop, while Windows 10 – chosen by Microsoft as its ‘natural successor’ – has 54.62%. Despite the end of support for Windows 7, one hardly sees a massive change of users from Windows 7 to Windows 10 in the above graph.

At the beginning of January 2020, the magazine Computerworld examined the topic and wrote that currently 417 million Windows 7 devices are still in use. They assume 29.7% Windows 7 PCs on 31 January 2020. Differs somewhat from the above figures, but the scale is correct.

A trend towards the Mac

Many companies have reduced their Windows PCs in response to the end of support, according to this announcement, and have already switched to Mac. Many more will follow in 2020. At insurance company Aegon , the number of Macs has increased by 104 percent in the last two years as employees have chosen to migrate to macOS rather than upgrade to Windows 10. Let me remind you of my German article IBM: Macs sind über ihre Lebenszeit 543 $ günstiger als Windows-PCs from 2016. At IBM, employees were free to choose between Windows PCs and Macs. There, IT made a cost advantage for the Mac world.

Currently, the proportion of Apple computers in companies around the world, according to this report, is growing rapidly due to employee voting programs. In fact, 72 percent of employees choose a Mac when they have a choice between a Mac and a PC. This is very good news for companies, the Jamf CEO said.

Recent studies by Jamf show that users, who can work on the job with their preferred device, are more productive, creative and cooperative. In addition, companies save between $243 and $543 per Mac compared to a PC in the long run (someone also read the IBM article I quoted above). In addition, 77 percent of employees say they are more likely to choose an employer or stay with a company if the employer gives them the choice of workstation. These are serious savings simply by offering a choice. All the more so if you also take into account things like the costs of employee turnover and the loss of company knowledge.

Companies that want to save money and retain top talent will continue to move to Mac in 2020 and beyond. That’s the forecast IDC is making. According to a recent study, corporate IT decision makers expect 13 percent of their current Windows 7 inventory to be replaced by MacBooks.