[German]Be careful when booking the HP Instant Ink subscription. If you cancel the subscription, you will not be able to print in the end and may look stupid. Here is the new swan from this clothes box.

I had reported on HP's methods to criticize its customers in the inkjet printer sector regarding the consumables 'ink' several times in the blog. If users use foreign ink, the printer simply stops working – a firmware update makes this possible.

But it gets even more sophisticated because HP Instant Ink is available on subscription. There's a variant that goes like this: People hold out their wallets to HP and say 'help yourself, there's enough in it' – this variant is not officially traded, but only under the counter or under a coat. The second variant is even more tricky, but is openly offered as a deal. People choose an option for HP Instant Ink subscription from various subscription levels on the HP site that they think is appropriate. 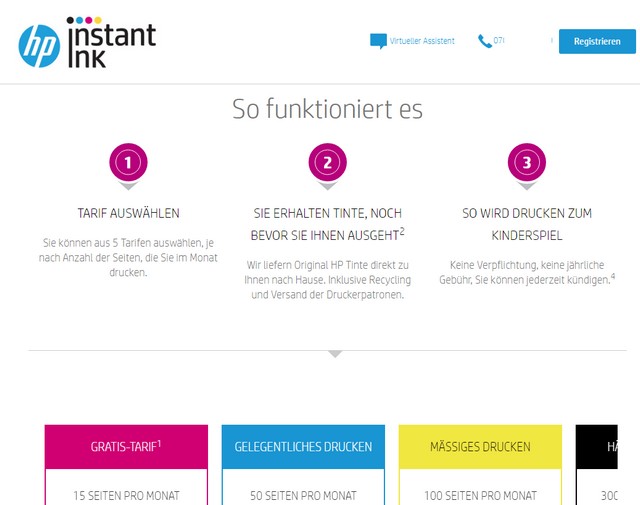 The promise: People get ink before it runs out during printing. And there's another promise on the HP side: save up to 70% on ink! HP writes about it:

Go ahead, print your full color photos. They cost the same as black and white pages.

With HP Instant Ink, your monthly fee is based on the number of pages you print, not on the amount of ink you use. You never have to worry again about printing in black and white to avoid using your color ink cartridges.

That sounds good, Sparen, we're all in on it, nothing can go wrong. And anyway, HP promises

Yes, you can change plans or cancel online at any time without penalty.

If you are not sure how much you print or your printing needs change month to month, you can start with any plan and change your plan online at any time on your HP Instant Ink account page.

But there is a pitfall, as the tweetster below detected suddenly:

Last month I canceled a random charge for $4.99 per month from HP called "InstantInk". Wasn't sure what it was for. I've had it for over a year but had no idea what it did.

I just found out what it did pic.twitter.com/lsFLDR5grv

The above tweet just came to my attention. Someone had this subscription and paid 5 US $ per month without knowing what it was for. As is customary, he canceled the subscription at some point. That's when he got the receipt: The printer told him at the end of the subscription that the ink cartridge could no longer be used as long as he didn't go back to the HP Instant Ink Cartrige program – no matter how full the cartridge was.

It's all legal, because HP sells a 'printing subscription' that allow you to print the specified number of pages. More is not possible, less or nothing to be printed is allowed. And when the subscription expires, you can't print more either – logo. Besides, HP is green – it doesn't matter if the cartridge or the printer is thrown away … because that's the license to print money.

This entry was posted in devices, General and tagged device, Warning. Bookmark the permalink.