German blog reader Andi O. had already pointed out the observation to me some time ago and sent me a compressed text about the facts of the case. I will just compiled it into an article I release here. At this point my thanks to Andi for the extensive tests – and sorry that it took a few days to prepare the text.

If something like this happens, the user naturally tries to carry out such a repair. Andi writes that he tried everything he found on the Internet in this case.

But according to Andi in his feedback, nothing helped. The only approach that helped him was an in-place upgrade repair. To do this, one simply reinstalls Windows in a running Windows, which results in a reinstallation of all Windows system files, without losing data and programs or apps.

Sometime later a feature upgrade to Windows 10 version 1903 arrived. Andi wrote, that he had already put the above research to rest and, according to his own statement, would not have bothered with them anymore. But then he came across this post while researching Windows 10 Help. There, my MVP colleague André da Costa describes five ways to fix Windows Update problems and repair Windows Update. The in-place upgrade that helped with Andi is also included. Andi asked himself whether this was one of the possibilities for the solution he was looking for?

A new investigation and new tests

The only difference is that when you ask what you want to keep, you have to answer the lowest point “Nothing. Everything will be deleted, e.g. files, apps and settings”.

Of course, this means that data and apps/programs as well as settings on the system drive will be lost. Since Andi only had Windows installed anyway, but no applications, this was no problem. He also had a backup available in case of an emergency.

At this point some comments from Andi and from me. After reinstalling Windows 10 version 1803 Andi used used wushowhide to disable the feature upgrade to version 1909. That worked so far.

Immediately after downgrade, Andi checked the Windows update database in Windows 10 version 1803 for potential errors. Andi assumed that the errors in the Windows Update database could be caused by an incorrect installation of updates.

Then he uninstalled the individual Updates and used Windows Update to have the updates reinstalled again and performed the troubleshooting.

The conclusion of this approach: He wasn’t successful to found something. No errors were reported from the Windows Update database.

New idea: Are drivers to blame?

Then it occurred to him that it might be related to updated Windows drivers, although he had no idea what drivers should have to do with the update database.

After each step, troubleshooting was performed to identify any errors in Windows Update. Andi writes: ‘I was lucky. Errors were displayed this time’. After clicking on Show detailed information, the following diagnostic information was suddenly displayed.

All screenshots here a kept in German, but I guess, it needs not too much phantasy to map it to other languages. 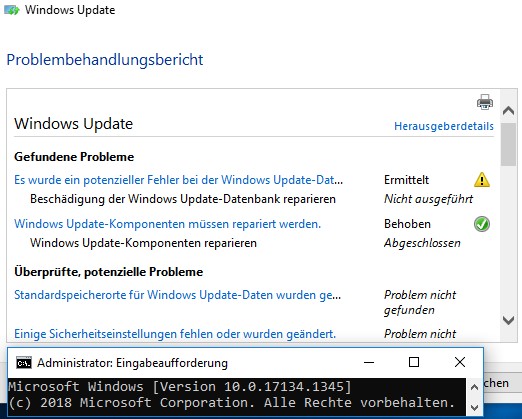 The above dialog box reports an error, but does not provide an indication of the exact cause. Instead it lists fixed errors and an unfixed issue in the Windows Update database. Since he uninstalled and then installed individual drivers, he knew which driver was involved. The cause was this time the Intel Bluetooth 20.60.0.4 driver.

Traces in the Event Viewer

herefore he called the Windows Event Viewer. This can be done, depending on the Windows version, in the search field of the Start menu or the task bar, via the entry ‘Event’ and the hit event viewer. The following entry was found in the Event Viewer:

The update error 0x8024CE16 was reported. Andi writes that he executed the troubleshooter several times. During each run, the troubleshooter reported that errors have been fixed, but that wasn’t the case. The conclusion is that nothing was fixed at all.

Do the old troubleshooting tips help?

So, after Andi was able to provoke the bug in the update database, he next worked through the five tips from André da Costa linked above. All these tips proved to be unhelpful, except for the radical method ‘Windows repair as in-place upgrade’, which has been mentioned already several times in the above text.

Andi then took another look at the Event Viewer. He noticed an inconsistency in the Bluetooth driver mentioned above. In the Event Viewer there was the error message from the above picture. According to Andi, Windows Device Manager reports everything was fine in contradiction. 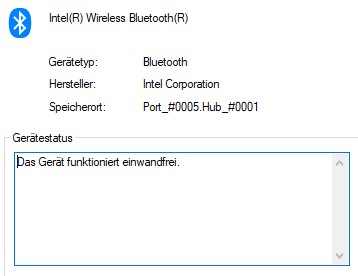 Since he is not using Bluetooth, he cannot confirm the message that everything is okay. But if this were the case and Bluetooth was working properly, Andi would close, then the message in the event display would be a misdiagnosis.

A suspicion: incorrect diagnosis in the update database

At this point, the suspicion arose that the Events might be involved and that the troubleshooter might not be able to handle that. So it would be something like a classic false diagnosis. This suspicion will be investigated in part 2.