[German]Users who have updated to the Windows 10 May 2020 Update (version 2004) complain about a new issue. When displaying movies (videos, games), graphic artifacts occur during output in multi-monitor mode in some cases. The cause seems to be the f.lux software in this case. Addendum: A fix is available.

The new Windows 10 version 2004 comes along with a change in graphics output. This version supports the Windows Device Driver Model WDDM 2.7 for the first time, which controls the graphics output. WDDM describes the architecture of drivers for graphic adapters under Windows.

Some people have switched to Windows 10 version 2004 because this build is supposed to provide improved multi-monitor support. Actually a good thing, if it weren't for the fact that reimplementation of WDDM drivers cause all kinds of problems.

For example, here in the blog I pointed out problems with RDP operation due to new WDDM drivers in Windows 10 version 190x (see Windows 10 V1903: Remote Desktop shows Black Screen and other articles at the end of the post). A workaround there was to force the use of an XDDM driver instead of the WDDM driver by group policy. This is becoming increasingly difficult, however, as Microsoft announced already for Windows 10 version 1909 that it would eventually remove XDDM support (see Windows 10 Version 2004: Deprecated/removed features).

This immediately went through the back of my head when I read the problem description. But in the current case it is not the cause.

On reddit.com you can find this article, which describes the phenomenon very clearly. It's a dual monitor setup with both monitors set to 240hz and 1080p. The problem only occurred after upgrading to Windows 10 version 2004.

Since i upgraded to the latest windows 10 update (2004) i get weird artifacts on my second monitor only on video related stuff (i've not testet games yet, but i could imagine its gpu related). That can be videos in browser like a youtube video or an local offline file with media player classic home.

I've not figured out when the artifcats starts to appearing, because after a pc restart or when i turn the monitor on and off again, they are dissapperaing for an unknown time ;)

One weird behaviour is, that when i set my second monitor to my main monitor the artifacts never starts to appearing (not even on the then second monitor, which would be my normal monitor)

On the second monitor, artifacts suddenly appear during video output. Below is a screenshot from a game where these areas were curled red. 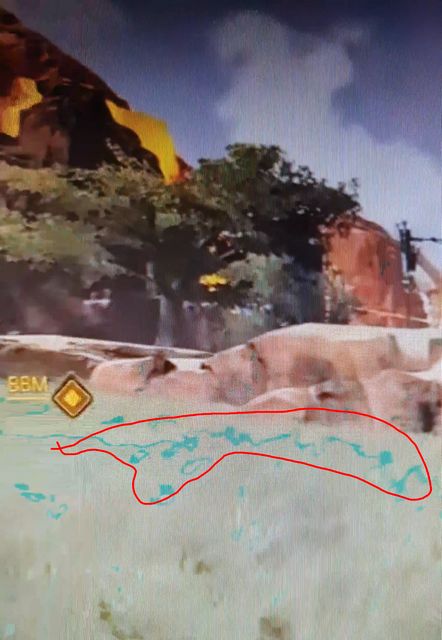 In this game scene the animated GIF makes this clearly visible. In the reddit.com thread other users confirm this effect. The picture here even shows the effect on two monitors at the same time.

Already in the thread a user suspects that it could be related to f.lux. f.lux is a software that allows you to adjust the color temperature of a display depending on the location and time of day (night mode with reddish display instead of blue mode). This is because the program was developed to reduce the strain on the eyes during the night and to reduce disturbances of the sleep pattern.

If the problem occurs, this means that f.lux has to be uninstalled. Any of you affected?

Addendum: The error was corrected in f.lux version 4.115, as you can read in this changelog. This was noticed by the colleagues of deskmodder.de.

This entry was posted in Windows and tagged issues, Windows 10 2004. Bookmark the permalink.