[German]Today still an issue, that has been observed through all Windows 10 builds. After upgrading to the next build, OneDrive fails and delivers 'OneDrive cannot connect to Windows'. There can also be printer problems. Here is some information about this topic that a German blog reader provided me. Microsoft has confirmed the problem, but did not provide a fix yet nor the workaround the reader gave me. Maybe this is helpful for one or the other admin.

Does an upgrade causes the OneDrive issue?

Blog-reader Martin told me in a mail (thanks for that) about his observation he made under Windows 10 with OneDrive. He wrote me:

the problem has been running through their INPLACES in MS for years. Only the inplace is affected, never a new installation with the ISO. The reason is a faulty procedure in the INPLACE. It affects:

Both had the same cause: An INPLACE Upgrade. But MS did not know this, nobody had ever noticed.

So once again it is a user of Windows 10 who has to show the Microsoft people where the problems are.

There is a workaround

Martin has also found a workaround, as he continued to write to me. The solution is to import the following value into the registry (via .reg file):

Martin told me: You have to do this right after the INPLACE[-Upgrade], i.e. when the version number has changed and the SETUP.EXE of the INPLACE is finished and the box has booted (in case of doubt into the SETUPCOMPLETE.CMD, which you can give to the SETUP.EXE) and boot again.

Martin also provides an explanation: If the key is missing, Windows "believes" that the INPLACE update is not ready yet. As a side effect the above error occurs with OneDrive and with the printers (see above note). Then OneDrive drops the following error message. 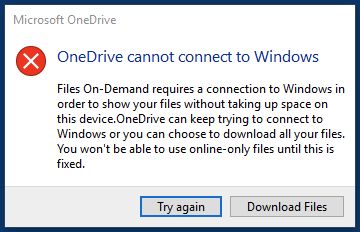 If the key is there after the INPLACE upgrade, you won't have any problems, Martin writes. According to Martin, you just can't predict when the entry is missing and when it isn't.

Whether one is affected can be checked via the CldFlt, according to Martin. To do so, open an administrative command prompt and enter the command Fltmc for testing. The command lists the found filter instances: 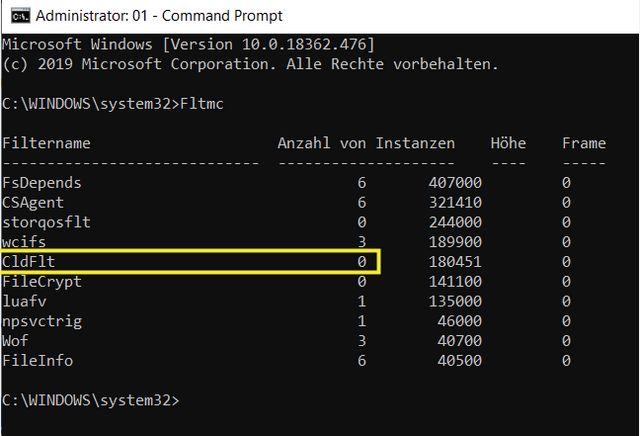 In the above sample output, the CldFlt entry has no instances. This is the bad case, in which OneDrive then cannot set up an instance to the OS. Then OneDrive Files on Demand does not work and the above error message appears. If everything is ok, the Fltmc-command returns an output like shown here. 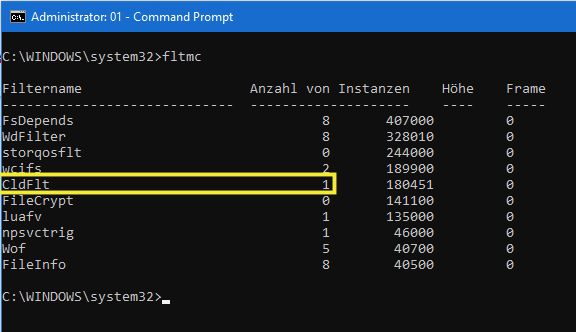 Martin E. told me in addition: This was our way to have NO problems after the last INPLACE upgrade to 1903 (the one to 1909 isn't a feature upgrade). In our pilot project we had, without the key , 5% failure with onedrive and 2% with the printers => 7% failure. When we set the key and booted, we had 0% failure. Due to the lack of 2004 INPLACE-Upgrade I can't say, if this is the solution this time as well. But it was in 1903 – and it "smells" like it again.

At this point my thanks to Martin E. for the information – and sorry that I delayed the publication for a month. Maybe one of you can use it and/or confirm Martin's assumptions.

This entry was posted in Cloud, issue, Windows and tagged issue, OneDrive, Windows 10 2004. Bookmark the permalink.

1 Response to Windows 10 2004 OneDrive issue: No access after upgrade