[German]A brief information: Microsoft has removed the Miracast receiver app in Windows 10 May 2020 Update (Version 2004). However, the app can be installed as an optional feature, if required. Here some information about this (annoying) topic.

Microsoft has declared a number of features as obsolete for the Windows 10 May 2020 Update (Version 2004) and is removing some of them (see Windows 10 Version 2004: Deprecated/removed features). Cortana has been adapted so that it is no longer pre-installed, but can be reinstalled as an optional feature. One user has now noticed already in June 2020 that the Connect app for Miracast reception is missing in this Windows 10 version, as can be read in this Microsoft Answers forum post.

Please let know, is it something that’s not supported for this version of OS or what..?

My laptop has Miracast Support, Miracast: Available, with HDCP (Found out by running dxdiag)

A MVP colleague then replied and described that this app is no longer installed by default, but can be installed as an optional feature. Here is his answer:

In Windows 10 version 2004, the Connect app is not installed by default.

We are now required to install the “Wireless Display” optional feature to have the Connect app available.

Windows Central took it up on the weekend so that it is now meandering through the web as a theme. The MVP colleague documented the steps to reinstall the feature on Windows Ten site.

3. Then select the Wireless Display option and click Install. 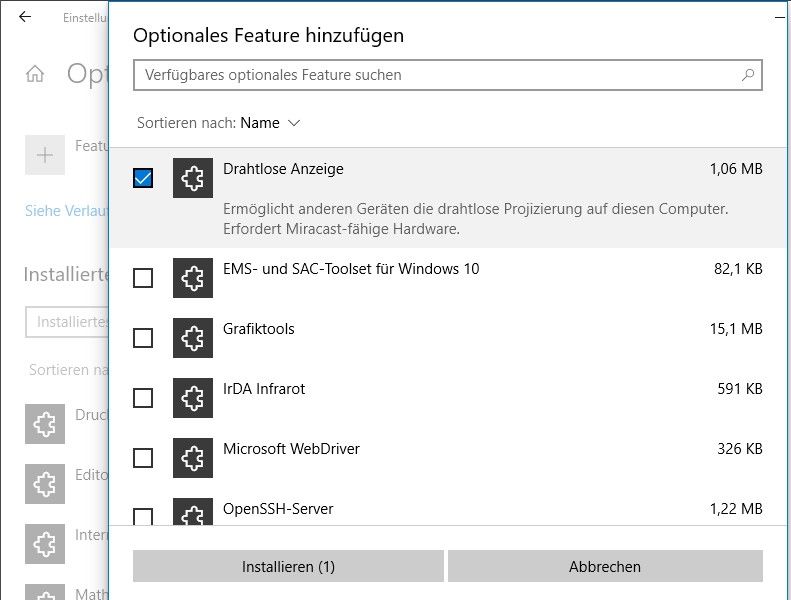 Some years ago, I had blogged intensively about the topic of wireless streaming, especially with the Miracast standard (see links at the end of the article). How to use the Connect app is described in the blog post Windows 10 Anniversary Update, Miracast and the Connect app. There I had done a test with several systems at that time. The results with Microsoft’s app were sobering – Microsoft never got the Windows 10 stable as a Miracast  receiver. Some users then uninstalled the Connect app (that works). But this probably led to an update installation error in January 2020 (see Windows 10: Installation issues with Update KB4528760 due to missing Connect-App?).

Sending screen contents including sound from a Windows 10 machine to a Miracast receiver is not affected by the above story, since this function (if supported by the hardware and drivers) is part of the operating system.

This entry was posted in Windows and tagged App, Miracast, Windows 10 2004. Bookmark the permalink.