[German]For months, Microsoft has been updating Windows 10 users to the new Chromium-based Edge Browser. This not only causes collateral damages in some case. The ‘obnoxious’ Edge upgrade experience is annoying users. Just saw a new sarcasm alarm of a tortured user.

Microsoft succeeds with its marketing-driven upgrade actions to annoy also the last users lastingly. Before I am accused of prankstery against Microsoft again, I have the article With Edge, Microsoft’s forced Windows updates just sank to a new low by The Verge in mind – they are traditionally Microsoft-friendly. Currently, Woody Leonhard is venting his anger at askwoody.com. I assume that he isn’t running a managed environment (e.g. via WUfB) because his production machine with Windows 10, version 1909, was offered update KB4576754 to upgrade to the new Edge browser.

Not without a Windows reboot, Sir

Microsoft has released this update to fix the issues caused by the previous update KB4559309 (see Windows: Edge Update KB4559309 replaced with KB4576754, fixes performance issues). Under the title ‘ Dear Microsoft, could you make Edge a bit more obnoxious?‘ you can find the following rant by Woody Leonhard.

So I’m sitting here plunking away on one of my production Win10 version 1909 machines, when a new update appears.

I needed to reboot the system – it had been running for almost two days without a reboot (sarcasm alert) – and when Windows came back up for air, Edge appeared full-screen. I tried clicking lots of things, but it wouldn’t disengage. In the end I navigated through a four-screen “tutorial” that, by default, wanted me to log Edge in to my Microsoft Account and oh-so-helpfully retain Edge surfing information to, you know, make my shopping experiences more tailored.

There may be technical reasons for the reboot – otherwise certain system files cannot be exchanged. Is however already a failure of Microsoft, under Linux such a thing would be only necessary with a Kernel update. This shows again, that Microsoft makes the same error as with the Internet Explorer. The browser or parts of it are apparently deeply interwoven with the operating system, so that the restart is necessary for an update.

Now let’s come to the really nasty part of the story. Since Microsoft’s developers are marketing driven, the user (at least in consumer environments) is forced into the obnoxious ‘Microsoft Experience’. That sounds in the above case like this:

I needed to reboot the system – it had been running for almost two days without a reboot (sarcasm alert) – and when Windows came back up for air, Edge appeared full-screen. I tried clicking lots of things, but it wouldn’t disengage. In the end I navigated through a four-screen “tutorial” that, by default, wanted me to log Edge in to my Microsoft Account and oh-so-helpfully retain Edge surfing information to, you know, make my shopping experiences more tailored.

When I finally got through unchecking all of the snoop settings, and closed Edge, it showed this on my Taskbar: 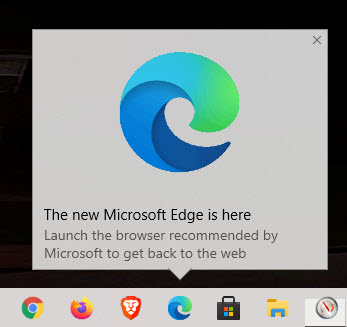 It’s entirely possible that Edge is the greatest browser ever – that it’ll make me brighter, more productive and definitely debonair. But it really twists my gizzard when an app takes over my machine and forces me through a series of privacy search-and-destroy questions.

I think the text expresses pretty much what some users feel about the products shipped from Redmond. I guess, we can accept that something technically goes wrong or gets stuck (if it doesn’t happen too often). But the fact that Redmond think they can act in that obnoxious way shows, where the situation when monopolies exist and the manufacturers can do whatever they want. By the way, the screenshot above shows that Chrome, Firefox and Brave also work as browsers on the system.

While writing this article I remembered an episode from the 90s. My employer at that time was sending me through various management seminars. In one of these seminars we were coached by a psychologist on ‘How to motivate employees properly’ (wasn’t bad and carried me for the last 30 years). His statement at that time about what you should never do: ‘Never act like some mothers who force their child to clean up their room and then expect or demand that the child does it with joy – that goes wrong and ends in a refusal attitude’. Why does this sentence somehow reminds me on the above Microsoft approach?

In managed environments, an administrator can control the distribution of edge updates. And in the blog post Microsoft’s Chromium Edge will be distributed via update soon I described how to block the upgrade with the registry value DoNotUpdateToEdgeWithChromium. But this will only help temporarily, because the support for the old Edge browser will expire in spring 2020 (see End of support for Internet Explorer 11 in Microsoft 365 and old Edge in Windows 10 from 2021).

I read also comments an askwoody.com, that some users experienced a silent install. After I mentioned a similar behavior like Woody Leonhard observed earlier in my blog I also got some feedback from German users, that they didn’t have had this experience. Maybe it’s an a/b test from Microsoft. What’s your experience/opinion on that behavior?

This entry was posted in browser, Update, Windows and tagged Edge. Bookmark the permalink.

1 Response to Microsoft and the ‘obnoxious’ Edge Upgrade Experience …