[German]Strange thing that came to my attention on Twitter. Windows Update offers people optional drivers, but they don’t really fit for the machines in question. Microsoft rolls out apparently optional INTEL driver updates of the type INTEL – System – <Date> <Version>.

Colleague Barb Bowman made this strange observation and documented it by a screenshot on Twitter. In the respective Tweet (just click on it) she writes that it is PCs from Dell, ASUS, HP. 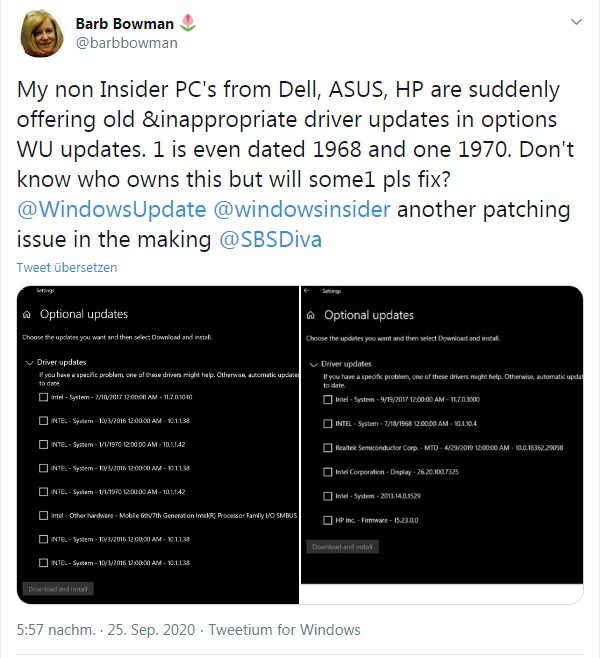 These systems all run with Windows 10, but are not in the Windows Insider program. On all systems, old and unsuitable driver updates suddenly appear as optional updates under Windows Update. These are entries of the type:

One driver is dated 1968 and one in 1970 (INTEL system driver). They are all INTEL drivers, but according to Bowman they do not fit on the machines. A user writes on Twitter that Intel seems to have changed its policy regarding driver updates for OEM computers. And Microsoft has adopted this in Windows Update. As a reason for the old dates for the drivers, the user states that they want to make sure that the drivers now offered are not installed over the OEM drivers. Because the OEM drivers were also delivered with a lower major version.

Addendum: There is also a Microsoft Answers forum post, where a user claims the following:

Seems strange, this behavior. This is not the first case, in the German blog post Windows 7/8.1 und die optionalen INTEL System-Treiber-Updates I had already reported something like this in 2016. Question: Have such updates been offered to any of you?

Addendum: It’s a feature, as a German blog reader pointed out. Within this INTEL readme we can read for chipset driver:

And there is this blog post, where Microsoft explain, why they ship drivers with really old dates.

I received also feedback from German readers, that the driver has been installed (although the date should prevent that) and messed some devices.