[German]Users of Apple iPads and iPhones that have switched to the new iOS 14 may run into ossies with WLAN access. The devices is using constantly new Wi-Fi MAC addresses. This may causes trouble with routers when MAC filtering is applied. The reason is the new Private WLAN Adresses in iOS 14.x, that has been activated by default.

A few days ago Apple released iOS 14 and then added iOS 14.0.1 to fix bugs (see links at the end of this article). However, some users have problems with WLAN access after upgrading to iOS 14.x because the devices are suddenly locked out. The following tweet brought the problem to my attention. 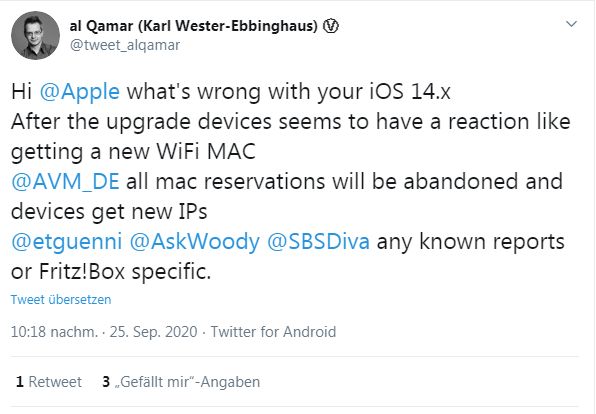 Blog reader Karl complains about the fact that iOS 14.x constantly requests new WiFi MAC addresses, causing problems with the AVM-FRITZ!Box. MAC address filtering on the FRITZ! box then no longer works. There is no more WiFi and therefore no more Internet access with the upgraded iOS devices.

Before the discussion about MAC address filtering starts: It is known that filtering MAC addresses at the router, which some people activate for security reasons, is useless and can be circumvented.

A user refers in the above tweet to this Apple support document on the subject of private Wi-Fi addresses. To protect the privacy of the device owner, iPhone, iPad, iPod touch with iOS 14.x can use a different MAC address for each Wi-Fi network. The background for this story called private Wi-Fi addresses is explained by Apple in this way:

To reduce this privacy risk, iOS 14, iPadOS 14, and watchOS 7 use a different MAC address for each Wi-Fi network. This unique, static MAC address is your device's private Wi-Fi address for that network only.

Trouble on the way

If the private Wi-Fi address option is enabled, the iOS devices may not be able to access the WLAN and thus the Internet via a router, if MAC filtering is enabled. Even in companies, issues may occur if e.g. VPN connections are set up using MAC address filtering. Karl describes this in the following tweets:

[FRITZ!Box] 6490 [FRITZ!OS] 7.12 causes epic troubles with "privacy WiFi address". Not only won't mac addr. related settings fail to work, even more one Apple device will get more than one IP from DHCP and you cannot delete the device as it appear online! Even after power cycle and reboot.

Means that ultimately if you setup filters for VPN you cannot set up the device with the same IP anymore. DM for details. Nasty to reproduce …

So users may run into trouble when upgrading to iOS 14.x because Private Wi-Fi addresses are enabled as an option by default. MacWorld has covered that here, and also Cisco issued a warning, according to this Apple Insider article.

A German user commented, that this may also be an issue with Android 11, and Cisco mentions also Android 10.

To disable the assignment of these Private Wi-Fi addresses in the settings, Apple provides the following steps. an. 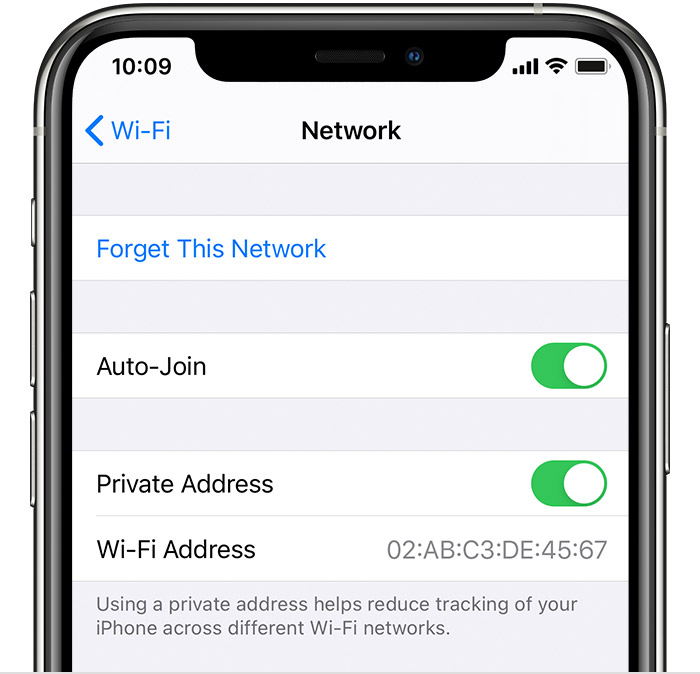 By disabling the Private Address option, the iOS device should be given a fixed MAC address again and access to the router including Internet access should work again.

This entry was posted in devices, ios, issue and tagged device, iOS 14, issue. Bookmark the permalink.