[German]Microsoft has now officially confirmed the certificate problem, which I already mentioned here in the blog, as of October 30, 2020 and has given details of when certificates will be lost during a Windows 10 function update.

A blog reader pointed out to me the issue, that several Windows 10 versions forget their certificates when upgrading if the October 2020 updates are installed. I covered the details in the blog post Windows 10 forgets certificates during upgrade. Microsoft Office 365 also has issues with the October 2020 updates. The download of updates probably fails because of missing certificates, as I explained in the blog post Office 365: Download fails (in ConfigMgr) after Oct. 2020 Updates. A Microsoft employee had confirmed this in tweets and Microsoft started an investigation. 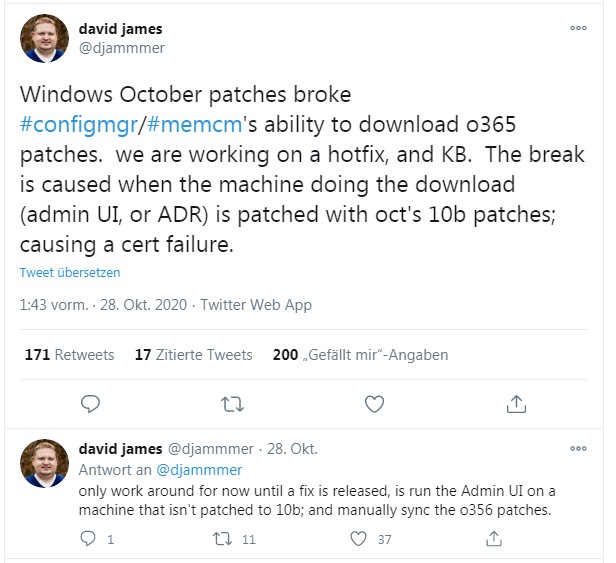 The systems with the above-mentioned Windows versions are only affected if a cumulative update (LCU) from September 16, 2020 (probably meaning September 15) or later has been installed and the Upgrade feature is running from media or an installation source that does not have cumulative updates from October 13, 2020 or later integrated.

Microsoft writes that this scenario occurs primarily when managed devices with obsolete bundles or media are updated using an update management tool such as Windows Server Update Services (WSUS) or Microsoft Endpoint Configuration Manager. This can also happen when using obsolete physical media or ISO images that do not have the latest updates built in.

Therefore, it should not affect feature upgrades that are triggered by Windows Update by installing a feature update that is offered. Devices using Windows Update for Business should also not be affected, according to Microsoft.

If the problem has already occurred, Microsoft suggests rolling back the feature upgrade to the previous Windows 10 version as a workaround. This uninstallation period must be completed within 10 or 30 days, depending on the configuration of your environment and the version to which you have upgraded. After that, you must resolve the issue (either use updated upgrade media, or uninstall the cumulative updates until September 2020, upgrade, and then have the missing cumulative updates installed for the new version of Windows 10).

In my blog post Windows 10 forgets certificates during upgrade  I had mentioned a workaround that allows you to manually export and then import certificates. Maybe this will help.Microsoft says they are working on a solution and will provide it in the coming weeks as an updated bundle and via updated installation media..