In Microsoft 365, Microsoft has integrated a feature called ‘Workplace Analytics’ for the evaluation of the productivity of workforces and has now activated that feature. Microsoft advertises that this functionality enables people to determine their productivity and also to measure whether they become more productive over time.

For example, it is possible to find out how long employees were in meetings, how often and how long e-mails were processed, etc. The Workplace Analytics function can access calendar and e-mail data as well as telemetry data. The results are then displayed in a dashboard. There is a promotional video from Microsoft that demonstrates this feature.

Of course, this calls for works councils and data protectionists, because Microsoft 365 is the ideal tool for monitoring workforces and conducting performance reviews. The Vienna based researcher and data protection activist Wolfie Cristl has addressed it in a series of tweets. 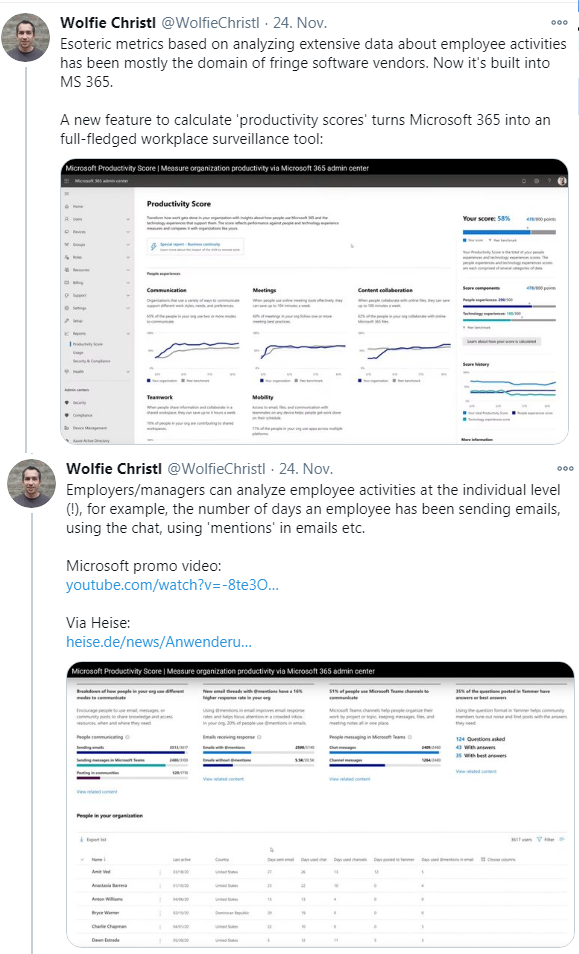 Now Microsoft’s Corporate Vice President for Microsoft 365, Jared Spataro, has published a commitment Our commitment to privacy in Microsoft Productivity Score, where he was specifying the changes Microsoft will make.

These changes to the product will bolster privacy for end users, while still enabling IT professionals to measure and manage their organization’s adoption of the productivity apps and services in Microsoft 365.

This entry was posted in Office, Security, Windows and tagged Microsoft 365, Privacy. Bookmark the permalink.