[German]ACROS Security has released a micropatch for the CVE-2020-1013 (WSUS Spoofing, Local Privilege Escalation in Group Policies) vulnerability for Windows 7 and Server 2008 R2 (without ESU license). Here is some information about it.

CVE-2020-1013 has been assigned for a 'Group Policy Elevation of Privilege' vulnerability in Windows 7 and Windows Server 2008 R2.  Microsoft writes:

A vulnerability exists regarding elevation of privilege when Microsoft processes Windows Group Policy updates. An attacker who successfully exploited this vulnerability could potentially elevate privileges or perform additional privileged actions on the target computer.

To exploit this vulnerability, an attacker would need to launch a man-in-the-middle (MiTM) attack on traffic between a domain controller and the target computer. An attacker could then create a group policy to grant administrative privileges to a standard user.

The security update addresses the vulnerability by enforcing Kerberos authentication for certain calls via LDAP.

The folks at ACROS Security still provide information in the post linked below that the vulnerability also allows WSUS spoofing – which Microsoft has not documented.

Microsoft writes in the security advisory, that details about the vulnerability are not publicly known and that exploitability is difficult. However, a POC was published by the security researchers from GoSecure in October 2020. As a result, security researchers at ACROS Security decided to develop a micropatch for users of Windows 7 and Windows Server 2008 R2 without an ESU license. I was made aware of the information about the release of the micropatch for Windows 7 SP1 and Windows Server 2008 R2 via Twitter. 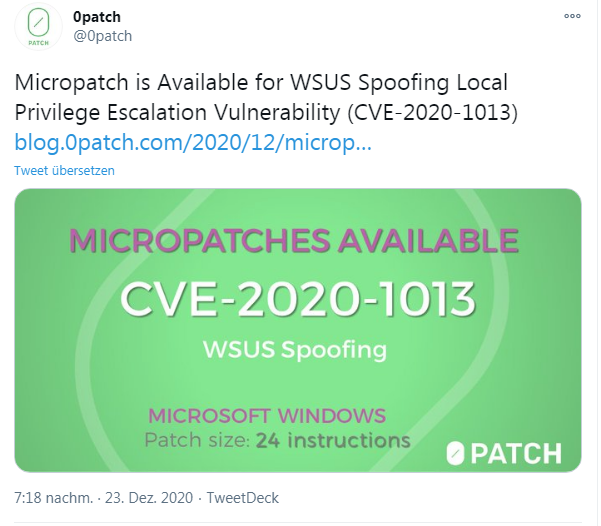 Mitja Kolsek has published some more details about this micropatch and the vulnerability in this blog post.  This micropatch is available immediately for 0patch users with PRO license and is already applied to all online computers with 0patch Agent (except in non-standard Enterprise configurations). As always, no computer reboot is required and users' work is not interrupted.