Windows 10: Find out the reason for blocked feature updates

[German]Why is a feature update for a Windows 10 machine blocked by Microsoft? Windows Update or the upgrade wizard usually does not provide much enlightening information. A PowerShell script FU.WhyAmIBlocked by Adam Gross and an article by him may help.

Compatibility issues with hardware and software often lead to Microsoft blocking a feature update for certain Windows 10 machines. The user then often only gets a meaningless information that his machine is not ready yet. Below is a screenshot I was shown on a test system (see Windows 10 up to V1803: Details for Upgrade to V1903 – Part 2).

If the Windows 10 Upgrade Wizard is used, it may also provide some details, as you can see in the following screenshot (see also Windows 10 V1809/1903: Upgrade for Zebra Tablet PCs blocked). 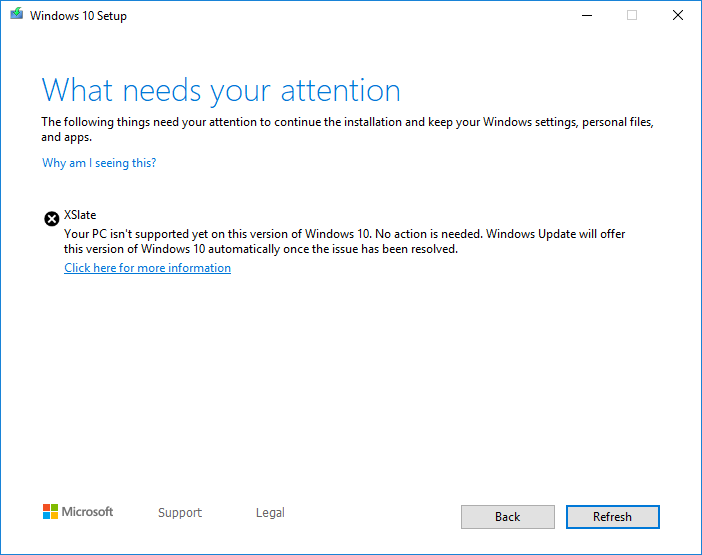 Sometimes, however, the whole thing resembles as "fishing in the dark" and the user don't get any clue, why the upgrade to a new version of Windows 10 is not offered. Sometimes just uninstalling certain drivers helps.

There is a PowerShell script called FU.WhyAmIBlocked, written by Adam Gross, that performs an analysis of why a feature update is blocked on a machine. I was reminded of it by the following tweet from blog reader Karl. 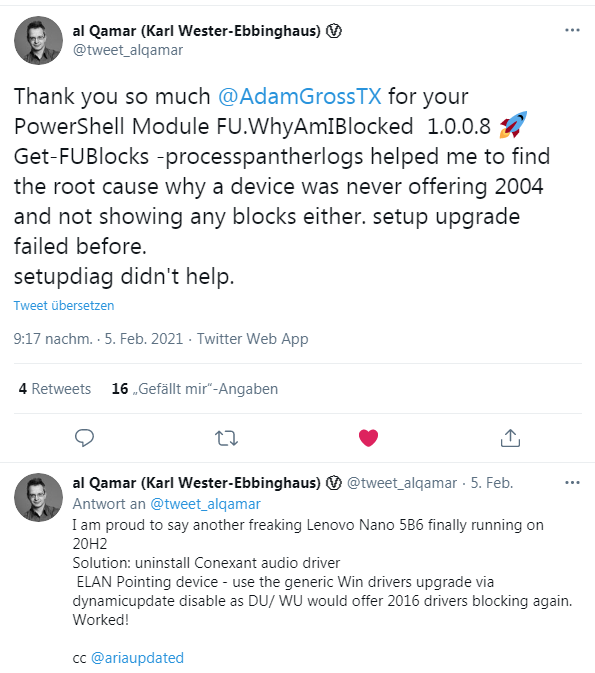 Karl was able to use the script to identify the Conexant audio drivers as upgrade blockers, while setup.exe's diagnostics did not help. The PowerShell script is available in the PowerShell Gallery and on GitHub, where you can also find some information on how to use it. The script evaluates the sdb compatibility database, but requires Python for this access.

Article on the topic

Adam Gross has also published the article Demystifying Windows 10 Feature Update Blocks on his blog, which goes into a bit more detail on how to find out what is blocking an upgrade. For example, if the upgrade wizard setup.exe is run and it aborts due to an error, the following file can be found afterwards:

on the system drive. In addition, the last created CompatData_*.xml file can be evaluated to find the reason for the termination, if necessary. In the article, Gross provides a lot of information to better understand feature update blocking. He also explains how the Appraiser results can be converted to an XML file and compared with the Windows compatibility database (appraiser.sdb). Maybe it helps further.