[German]A small addendum to a topic that I've had on my scratch sheet for a few weeks now. The printer manufacturer Hewlett Packard (HP) has been annoying users lately by blocking the use of third-party ink or toner through firmware updates. A class action lawsuit was recently filed against HP in the US because of this. Here is some information.

The hook for the class action lawsuit

Smart users have since keep their hands of HP printers, as the manufacturer cyclically repeats this little game of rendering third-party printer cartridges unusable via firmware updates. I have documented this in detail in various articles linked at the end of the post.

Class action lawsuit in the USA

However, HP probably broke the camel's back with the last action in November 2020. Again, numerous HP printers worldwide were rendered unusable by firmware updates, because they no longer accept third-party printer cartridges. I get such things very quickly – this time through user comments on the blog post Does HP blocks 3rd party ink cartridges again on its printers (Jan. 2019)? I had then taken up the case in the blog post HP firmware update for ink/laser printers blocks third-party cartridges (Nov. 2020).

Then in early March 2020, I received this comment on my English-language blog post Does HP blocks 3rd party ink cartridges again on its printers (Jan. 2019)?  Back in December 2020, a class action lawsuit was filed against HP in a district court in Northern California. 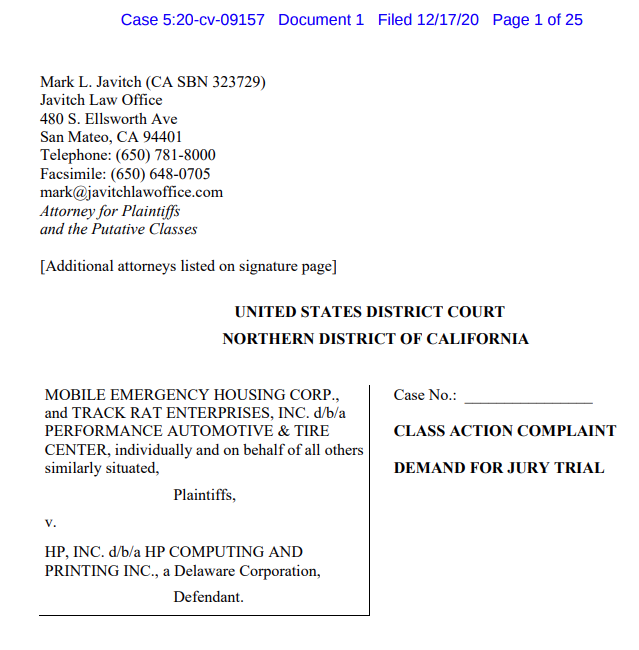 MOBILE EMERGENCY HOUSING CORP. and TRACK RAT ENTERPRISES, INC. d/b/a PERFORMANCE AUTOMOTIVE & TIRE CENTER are taking legal action against HP for rendering their HP printers unusable. The plaintiffs' allegation is that HP is unlawfully forcing users of its printers to purchase and use only HP ink and toner supplies. It does this by unauthorizedly transmitting firmware updates for HP printers over the Internet that lock out competitors' ink and toner cartridges. I particularly liked, what  the lawyers wrote:

But back to the issue at hand, counsel contends that Plaintiffs and Class Members, who reasonably and lawfully purchase competitors' much less expensive and equally effective consumables, have been left with unusable printers and consumable cartridges as a result and due to the design of HP equipment. It is also argued that Plaintiffs and the Class do not have the opportunity to make an informed decision as to whether to accept the Firmware Update and the purported benefits associated with it, or to reject the Update.

As a result of HP's malware, owners of HP printers are regularly forced to purchase HP cartridges, which HP sells at significant markups. Currently, I do not know the status of this class action lawsuit. But just so you know, HP is regularly hit with such class action lawsuits in the US. On this website, a group of lawyers is soliciting plaintiffs and writes that one case ended with a settlement of 1.5 million US dollars.

I would like to read about such a lawsuit against Microsoft regarding their Windows 10 updates and upgrades.

21 Responses to Class action lawsuit against HP over blocked cartridges