[German]Windows 10 users may run into activation error 0xc004c003 – the error has been running through various Windows versions for years. For Windows 10 version 2004 as well as version 20H2, Microsoft has now released a workaround for this error, which occurs in conjunction with the January 2021 preview update KB5001692.

Windows 10 users may face multiple activation errors. In the case of activation error 0xc004c003, activation by phone is recommended. But there is a special case, caused by an update, as I've learned.

Microsoft has published the support article KB5001692: Windows Activation fails with error 0xc004c003 on devices which have installed the Windows 10 January 2021 nonsecurity preview release or a later version. In this particular case, the error text from the following screenshot is displayed:

We can't activate Windows on this device because you don't have a valid digital license or product key. If you think you do have a valid license or key, select Troubleshoot below. Error code 0xc004c003. 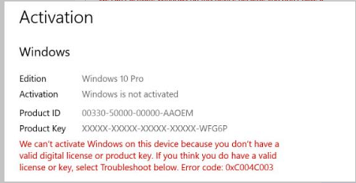 This issue can occur when users attempt to activate the operating system with a digital product key (DPK) for OEM Activation 3.0 (OA3). The cause of the 0xC004C003 error is an attempt by a licensing code component to access a registry structure that does not have proper access. A resulting "Access Denied" error causes the product key to fail to extract correctly.

Microsoft writes that the error does not occur if the security update from January 12, 2021 or an earlier update is installed. So the workaround is to uninstall the optional preview update KB5001692 (and later updates), hoping that the activation will then work.

This can happen in an administrative prompt using the above command (insert the kb numers of the updates to be removed). No idea if this issue is fixed with March 2021 update – Microsoft has not published a date for the release of the support article. (via)