[German]Short note or question to the administrators of a Windows Server Update Service (WSUS): Does the synchronization work for you? There are reports, that sync (at MECM) is failing since yesterday.

A first hint came in this German comment on the blog with reference to this tweet. There the sync problems started between 16:30 and 20:00, with an error 0x80131500 reported. 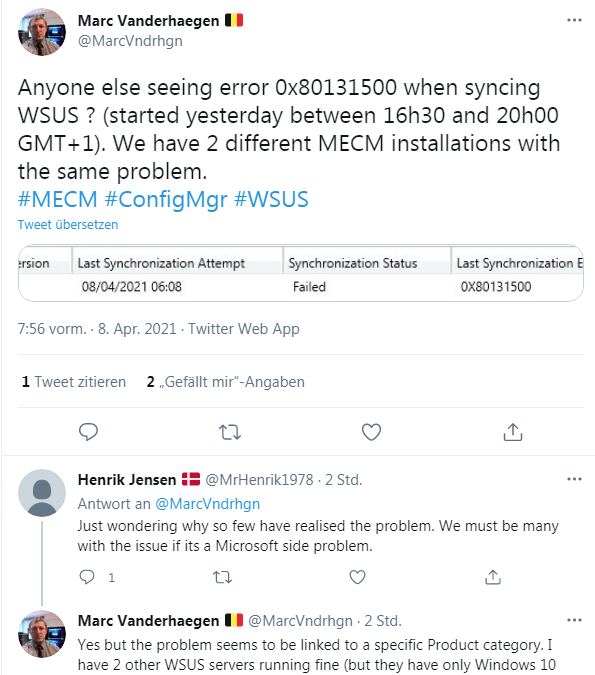 In the above tweet, the affected party refers to Microsoft Endpoint Configuration Manager (MECM), a software product from Microsoft’s System Center suite, and states that some of its WSUS are synchronizing. In replies to the above tweet, several users confirm these synchronization issues. Panu Saccu also raised the issue on Twitter. He receives the UssInternalError: SoapException – and in the thread, the problem is also confirmed by some of those affected. 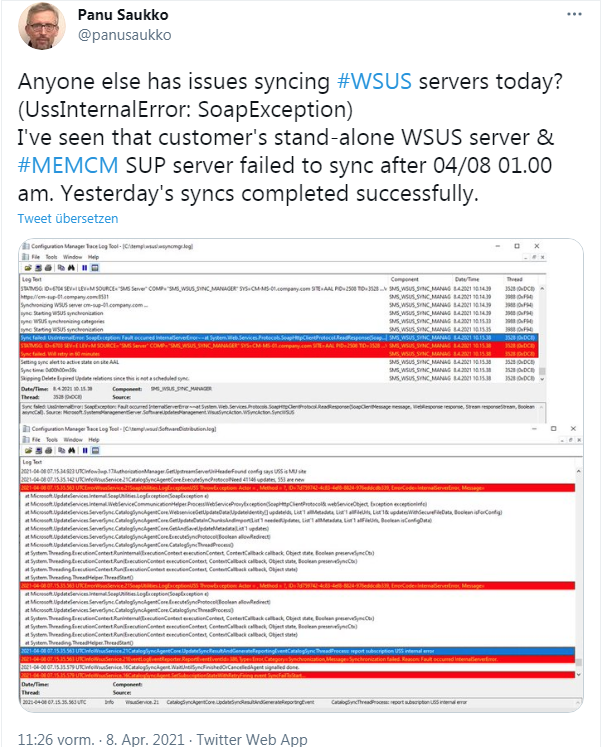 And at German site administrator.de I found this post, which also reports something on the subject. In the comments, some users confirm the problems, while others were still able to synchronize successfully this morning. This is also evident from the comments that have now arrived for the German edition of this blog post.

The error code 0x80131500 given in the above tweet stands for COR_E_EXCEPTION (see also my post Microsoft Store: Error 0x000001F7 or 0x80131500) and is thrown by NETFX (is at least documented in the NETFX SDK). This indicates an internal error in the communication between WSUS and the Microsoft servers. There ist a Microsoft article WSUS synchronization fails with SoapException, where a similar problem (without the above error code) is described.

I found in a search the articleFailed to set Subscriptions on WSUS Server Error 0x80131500, which gives the advice to evaluate the WCM.log. The article has some more hints on what to try if necessary. But I am not sure if this helps. On Technet you can find this forum post, which also gives hints (setting the content directory) – and this thread also gives hints what else to try in terms of troubleshooting. But I’m not sure if this is useful in the current case and if Microsoft has to fix something on the server side. Or do any of you have other insights or a solution?

Addendum: Within my German blog I got the feedback, that it’s related to Visual Studio – unchecking Visual Studio in WSUS Categories solved it for affected readers (as a temporary Workaround).

Addendum 2: It was due to Visual Studio, as confirmed by the product team – it was then fixed and WSUS should sync – see the following tweet.

This entry was posted in issue, Update and tagged Problem, WSUS. Bookmark the permalink.