[German]As of May 11, 2021, several Windows 10 versions are out of support and have reached their End of Life, meaning they will no longer receive security updates in the future. Microsoft recommends upgrading to current Windows 10 builds, but not every user can do that. The security provider ACROS Security has now announced that it will provide security patches for Windows 10 version 1809 for one year. Here is some information on this topic.

I had already mentioned in the blog post Supportende für Windows 10 Version 1803, 1809 und 1909 that the following Windows 10 versions received security updates for the last time on May 11, 2021.

So End of Support is reached, and users will be forced to upgrade to newer Windows 10 buildy by Microsoft. Only owners of a Windows 10 Enterprise LTSC 2019, that's built on Windows 10 Pro version 1809, will continue to receive security updates. In my German blog a discussion arose as to whether perhaps updates to this LTSC version can continue to be used for existing Windows 10 V1809 installations. I think this is unlikely, but we will have to wait and see.

Microsoft did recently remove the last upgrade blockers for Windows 10 versions 2004 and 20H2, as I reported in the blog post Windows 10 V2004/20H2: All upgrade blocks removed (May 2021). However, it remains to be seen whether all versions can be upgraded without any problems. Not every user of a Windows 10 version 1809 installation will therefore enthusiastically want to switch to the successors Windows 10 2004 or 20H2. After all, these versions definitely had their quirks when they were released, as people point out in this article.

Due to the issues outlined above, a little note for people who want to continue using Windows 10 version 1809 even though Microsoft is no longer providing security updates. Mitja Kolsek, the founder of ACROS Security, brought the following tweet to my attention. 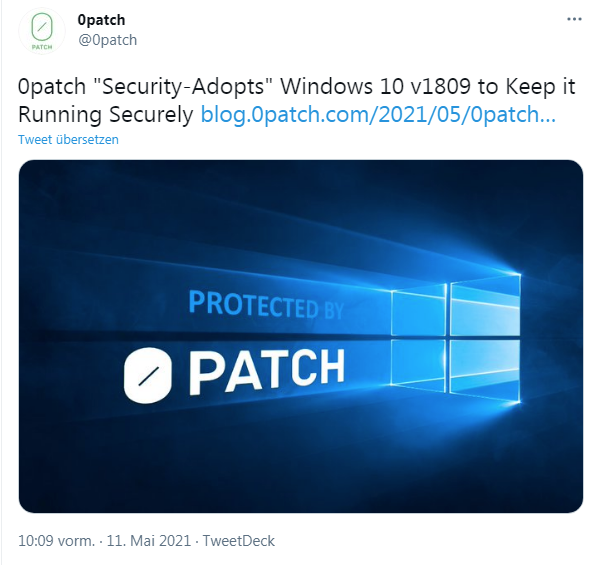 ACROS Security and its 0patch solution are well known, as they provide micropatches for the out-of-support Windows 7 and Windows Server 2008 R2 for a small price. Notes on how the 0patch agent works, which loads the micropatches into memory at runtime of an application, can be found in the blog posts (like here).