[German]A brief information for Windows users who still use Internet Explorer 11 as their browser. The desktop version under Windows 10 will be taken out of support in certain variants on June 15, 2022, and will no longer receive any updates. Microsoft is now completely relying on Chromium Edge as the browser in Windows 10. Here is some more information about it.

The fact that Internet Explorer 11 will not be further developed and will eventually die, I had already mentioned here in the blog several times (see links at the end of the article). Now the farewell of Internet Explorer 11 in certain Windows 10 versions has been announced. I became aware of the situation via this tweet. 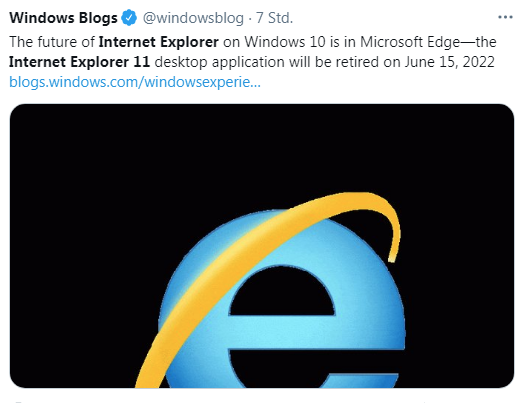 Microsoft Edge not only offers a faster, safer, and more modern browsing experience than Internet Explorer, but it's the only browser with Internet Explorer Mode ("IE Mode") to ensure compatibility for older IE-based websites and apps.

Microsoft justifies this here with the improved security of Edge, and praises the compatibility, so that the product lines can be streamlined as well as optimized in relation to IE 11. Details can be found in the corresponding Microsoft documents, which are linked here.

This entry was posted in browser, Windows and tagged Internet Explorer 11, Security, Windows 10. Bookmark the permalink.