[German]The Chinese company Alibaba offers an app called UC Browser for Android and iOS via its subsidiary UCWeb (resides in Singapore). The browser is ranked fourth in the world by the number of users. Now it has come out that the subsidiary UCWeb is pulling the browsing and search history of users who use the app. This also applies to incognito mode, and this behavior is consistent on both Android and iOS devices.

The UC Browser first appeared as a web browser in August 2004 and is also available for Android and iOS. The browser is especially popular with Android users, with the majority of users coming from the People's Republic of China and India.

Those who downloaded the UC Browser app from Google's Android Play Store or Apple's iOS App Store, and read the description beforehand, learned that in "incognito" mode, no history of websites visited and no search history would be recorded by the app. Such guarantees, along with promises of fast download times, have made the app from Alibaba subsidiary UCWeb incredibly popular. The app boasts 500 million downloads for Android alone and ranks 4th in mobile browser distribution.

However, insiders have always been suspicious of the app for security and privacy reasons. Anyone who reads through the section on security and data protection in the English-language Wikipedia is likely to keep the fingers away from this app. Now Gabi Cirlig has revealed in a blog post that the app diligently forwards the user's activities such as browsing and search history to the developers even in incognito mode. 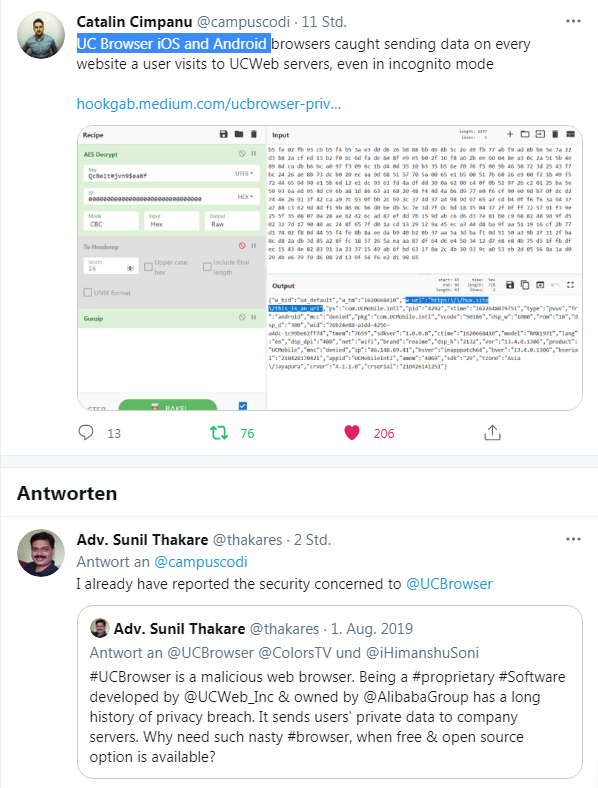 In this video, it's demonstrated how data is transmitted while surfing. In Android, the data about user behavior is even encrypted with AES. Since Forbes picked up on this and had it verified by two other experts, the waves in the English-speaking user sector have been running high. So always be careful which browser you install.