[German]Since April 2021, there is an issue that updates have broken Windows Server Backup or diskpart on Windows Server 2012 R2. Trying to mount virtual hard disks (VHDs) ends with error messages. Uninstalling the update KB5001382 solves the problem. It seems to be a Synology related issue. A fix is supposed to be coming, but there is a workaround.

The issue has been on my list of issues for some time. German blog reader Simon N. had emailed me about it – but I had already saw the info too. Simon wrote:

Dear Mr. Born,
I always enjoy following your blog and have something for you […]. In short: VHDs on network drives can no longer be mounted.

If I am not mistaken, you have good contacts to Microsoft. They will be happy about this

Regarding the last sentence: Unfortunately, I can't confirm that I'm having good contacts to this "black hole" in a foreign galaxy – at best, I can feed in something via Twitter or forums.

Simon pointed in his mail to a German forum thread at the colleagues of administrator.de. There someone asked in April 2021, whether it could be that Microsoft has hilled the Windows Server backup with wbadmin or diskpart with the April 2021 updates?

Since yesterday I have been getting more and more errors, that the access to the used backup drives (VHDs) was "denied" (happens sometimes, if for some reason the drive was not mounted in time). But no, that is not the cause this time.

The used backup disk is missing the description and a drive letter can't be assigned either. If you start the backup manually, it fails. If you try to create a new backup on a different medium, you get the following error message: 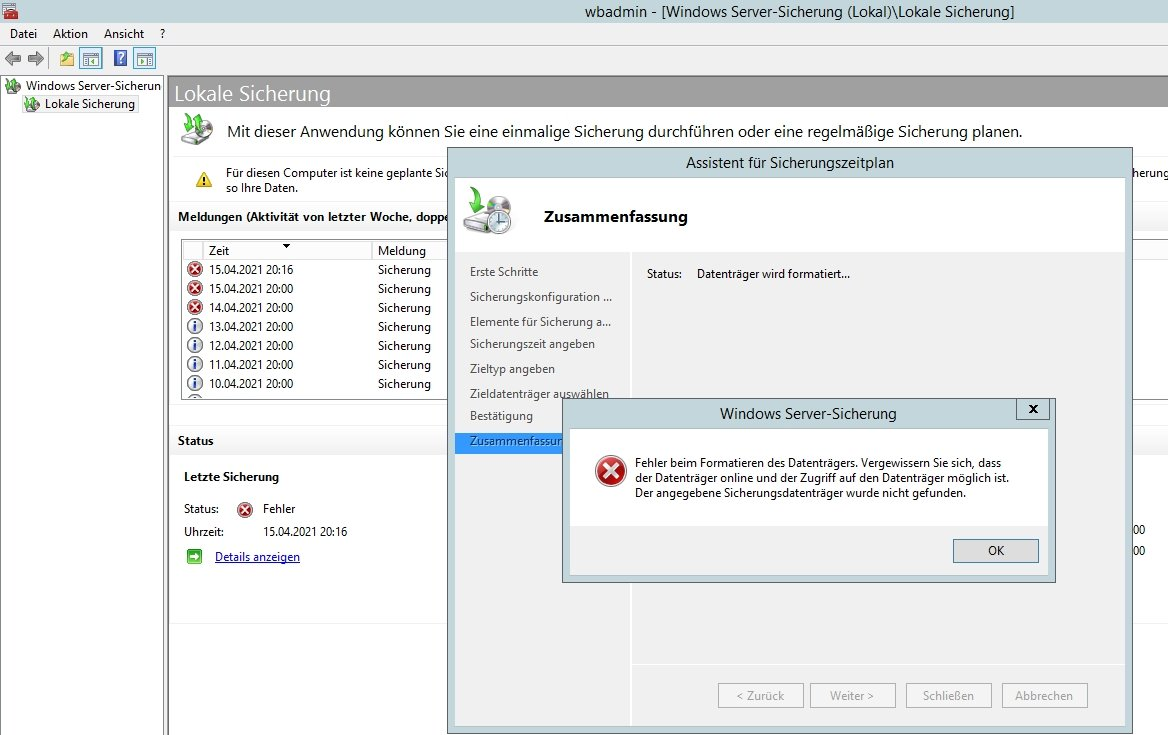 The disk is partitioned accordingly, but not formatted![…].

Within the thread, the person concerned could then narrow down the problem even more precisely and wrote:

[…]Have probably found the cause:

Diskpart seems to have an error when mounting the partition. This suspicion is confirmed when you try to delete the partition, you get the message that the partition is in use. If you force the deletion, the VHD can be disconnected afterwards.

So mounting VHDs on network drives may not work anymore …

Certain operations, e.g. renaming, that you perform on files or folders that are on a shared cluster volume (CSV) may fail with the error "STATUS_BAD_IMPERSONATION_LEVEL (0xC00000A5)". This occurs when you perform the operation on a CSV owner node from a process that does not have administrator privileges.

I contacted Simon N. again by mail yesterday and he replied as follows:

It seems to be a problem related to Synology. Because they have confirmed this and are apparently working on a fix for the problem. Should probably come with the next update.

Who has now shot the buck, but it is difficult to say. The network connection is established with the defined credentials, but apparently diskpart then accesses the VHD on the share with other (possibly system?).
Workaround is simply to give "everyone" access rights to the VHD(s). Then the mount as well as the eject works fine.

Since it worked before the patch, something must have changed in the behavior of diskpart. Maybe diskpart works correctly now and the error is in the DSM.

Thanks to Simon N. for these hints, maybe it helps someone.