[German]Microsoft probably released the preparation update KB4023057 for machines with Windows 10 again the days. The update is supposed to improve the reliability of the Windows Update service. I interpret the whole thing in such a way that once again some update problems were found on the Windows 10 systems of private users, which one wanted to eliminate.

The colleagues from Bleeping Computer have noticed that this update has been re-released. I came across it via the following tweet. 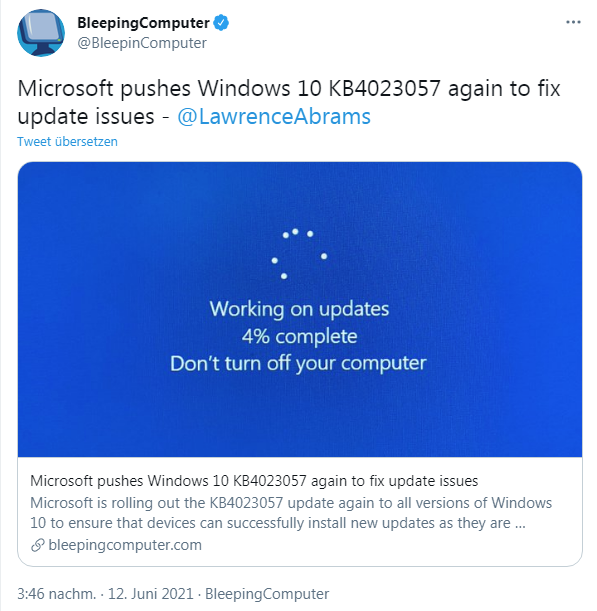 Update KB4023057 (Update for Windows 10 Update Service components)  is distributed via Windows Update according to this support article. It is available for all Windows 10 versions, from RTM (1507) to version 21H1, and is distributed via Windows Update. The purpose of this update is to fix issues with the update process in Windows 10 that can prevent the installation of important Windows updates. These improvements are meant to help ensure that updates are installed seamlessly on the respective Windows 10 client. Additionally, Microsoft claims to improve the reliability and security of devices running Windows 10.

The update will be distributed cyclically in updated versions each time, probably most recently in April 2021. The files delivered via update in June have a date of May 26, 2021. My guess is that certain upgrade blockages that prevent deployment or successful installation of the feature updates (whether technical or user-made) should be removed. Also, the update may free up space on the device if there is not enough memory to install Windows updates. Microsoft provides the following information in the support post:

This update is not deployed for Windows 10 versions 1809 and later in the Microsoft Update Catalog, and generally not for WSUS. So, it is not available for WSUS used in enterprises for update management. More details can be found in the support article and the articles linked below.