[German]Is there a problem with NAS systems from QNAP that certain models suddenly fail and "die", so to speak, during shutdown. The units can no longer be booted afterwards. I have found affected people with the TVS-872XT model, but also with other variants of the TVS series. A blog reader pointed me to corresponding reports. Let me summarize some information I have.

It was a short personal message from blog reader Nico M. M. that reached me via Facebook. Nico referred me to the QNAP forum, where in the thread TVS-872XT dead after normal shutdown… is discussed about sudden failures of the hard disks in question. One user wrote already in February 2020:

Hi guys,
I have a QNAP TVS-872XT which was working fine in past year til 2 days ago, since I got a new APC UPS and plan to use it for the NAS.
I did shutdown the NAS via QTS menu and waited until the unit completely off, after the unit shutdown and waited for 2 minutes unplugged the power cord, plugged it to the UPS, than the NAS not able to power up, it got no response when I press the power button.

The QNAP NAS unit was simply dead after the scheduled shutdown when it was connected to an uninterruptible power supply. Attempts to power up the QNAP NAS unit on the original power supply failed, as did other diagnostic attempts described by the affected person in his post. No matter what the affected person tried, the station would not boot up. The error occurred on its own after the planned shutdown.

You could simply shrug your shoulders and accept that something like that can happen – even if it happens in connection with a scheduled shutdown. The TVS models are used in professional environments – the following is a screenshot of the TVS-472XT, which is sold for over 1,300 Euros. 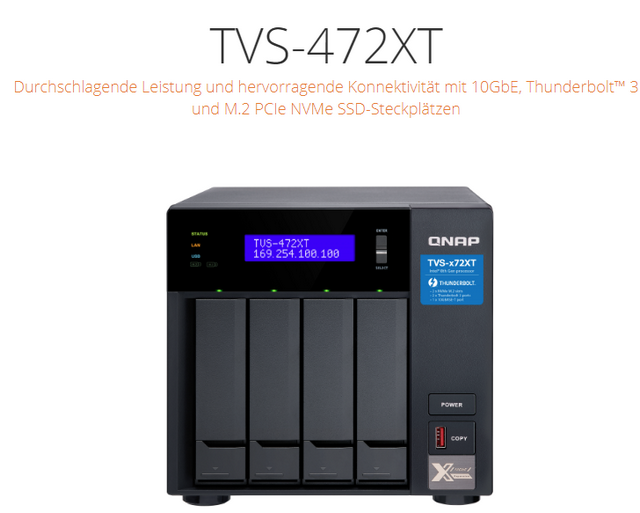 Going through the thread, which is now many pages long, there are other users confirming similar scenarios on their TVS-872XT devices. In this post, a second affected person writes at the end of March 2020:

Seems like the exact same problem i got today on my TVS-872XT.
Did support reply, have they sorted you out?

and another affected person outlines his failure like this:

Same thing is happening now to my TVS-872Xt. I shut it down to change power outlets on my UPS. Tried restarting and the screen lit up for a few seconds and then died. It won't power up at all now.

So a shutdown of the NAS unit seems to be the problem, and the station tends to fail. It could be isolated cases. If you go through the nine page thread, there are a number of others affected. There are also a few hits on reddit.com, such as here or here. It is always devices from the TVS model series that show the error. It crystallizes that the motherboard with the CPU probably cannot boot up after shutting down and powering off. Whether there is a component failure or a firmware issue is currently unclear to me. It seems to affect other models in the TVS series as well.

Most users were able to claim the manufacturer's warranty – but an uneasy feeling remains, especially since people can no longer access the stored data. There are reports that QNAP has returned new units in exchange for broken ones. Single failures don't seem to be the case.

Blog reader Nico wrote me that he is already in contact with QNAP support, because in his area the TVS-472XT series is used and probably the complete xx…72XT series is affected. To the reaction of QNAP Nico wrote :

The answer was that our system was not affected by "spontaneous infant death". This information was requested by QNAP Support Germany directly from QNAP Support Taiwan for our serial number.

When we asked which series/models, batches or components per se were affected by this error, we received the following answer:

Quote: "…thank you for your message, this information is not available to me, unfortunately Taiwan is keeping a low profile. I ask for your understanding and insight for this company policy. In your case, I have explicitly asked Taiwan about your NAS model (with serial number) and received feedback that your NAS is not affected by your concern. If there are other NAS systems that you are concerned about, please open a new ticket in each case regarding them…"

Nico concludes from the answer that one can probably state that the serial defect was thus implicitly admitted. However, since Taiwan does not want to disclose which devices exactly are affected, one can only conclude that all owners of QNAP NAS devices worldwide should now probably send a corresponding request to QNAP support, who will then send this request to Taiwan in turn. Nico assumes:

There they will check manually in an ominous database if it is to be expected that the device won't boot up after a shutdown. Creepy information policy and even creepier support process …

After contacting Nico, I have included the topic here in the blog to possibly find out whether more German users of QNAP NAS systems of the TVS-472XT model series are affected, and whether there is perhaps already an explanation.

This entry was posted in devices, issue and tagged issue, NAS. Bookmark the permalink.

45 Responses to Are QNAP NAS systems (TVS-872XT) dying a sudden death after shutdown?