[German]After the six-hour major outage of Facebook services on October 4, 2021, it seems that today, October 8, 2021, there is also a hitch again in Facebook and the services Instagram and WhatsApp. I was just still able to access Facebook, but there is / was an outage today.

On Twitter there is this status message from the Facebook social media team, which says that individual people probably had problems with the services again.

The site downdetector.co.uk shows an increase in disruption reports from 8:30 p.m. onwards for Facebook, Instagram and WhatsApp services, but this probably subsides again. The German site allestoerungen.de also shows this peak from 20:30. 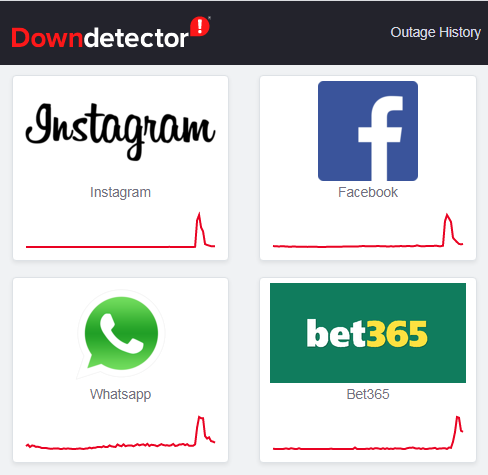 The Verge reports in this article that many Instagram users are affected. However, according to the above note, it affects more services. The reason for this problem is currently unknown. Any of you who had problems accessing one of the services? diesem Artikel davon, dass viele Instagram-Benutzer tangiert seien. Gemäß obigem Hinweis betrifft es aber weitere Dienste. Der Grund dieses Problems ist aktuell aber noch unbekannt. Irgend jemand von Euch, der Probleme beim Zugriff auf einen der Dienste hatte?

This entry was posted in issue and tagged issue. Bookmark the permalink.