[German]In the just released Windows 11, there seems to be a memory leak in Explorer. The file manager grabs memory during operation and does not release it again. The bug has already been reported by Windows Insiders, but is probably not fixed in the released version. However, it looks like Microsoft will take up the problem and hopefully release a fix.

On reddit.com, this user has been complaining about a memory leak in Windows Explorer for two months. He writes that Explorer no longer releases the occupied RAM when opening and closing folders, but continuously occupies memory:

Whenever you open windows explorer and close it, the ram it uses is increased by a few MBs without going down when you close it. For example: When I turn on my pc, Windows explorer uses 60mb, and then when I open a random folder, it reaches 80, and when I close the same window, it only drop to 70mb, not 60. and after I open and close a folder multiple times, it reaches a 1 GB!! even after closing everything! The only way to bring it back to normal is by restarting windows explorer from task manager or restarting the computer. It comes close to being unusable cuz of too much ram usage if you don't know that this bug exists. This even makes the Fans go crazy too. I have attached 3 pictures as an example. pic 1 is when you open File explorer for the first time after a boot, pic 2 is after you open it 2 to 3 times and close it, pic 3 is when you open and close it several times. As you can see, its stuck at 700MB even with all windows closed.

Many users confirm this problem and there was a request in the thread to upvote this bug in Microsoft's feedback hub so that this is fixed. Another post on reddit.com complained about this three months ago. One might now assume that this is fixed in the final of Windows 11, but this is not the case. On reddit.com there is this fresh postwhere someone asks:

Anyone having the Windows 11 memory leak issue?

A couple news outlets reported on it a few days ago, but I'm wondering if anyone is experiencing the W11 memory leak bug firsthand right now on the release build.

And in this fresh post on reddit.com someone hits the same notch. There, another user states that the whole thing is related to the new UI elements in Explorer. If you return to the ribbon (Winaero), the memory leak is gone. Another two-day-old post with the same tenor can be found here. PC-Gamer picked up on the issues a few days ago in this article.

Windows Lastest picked up on the issue in this tweet and in this article, and explains some of the context. 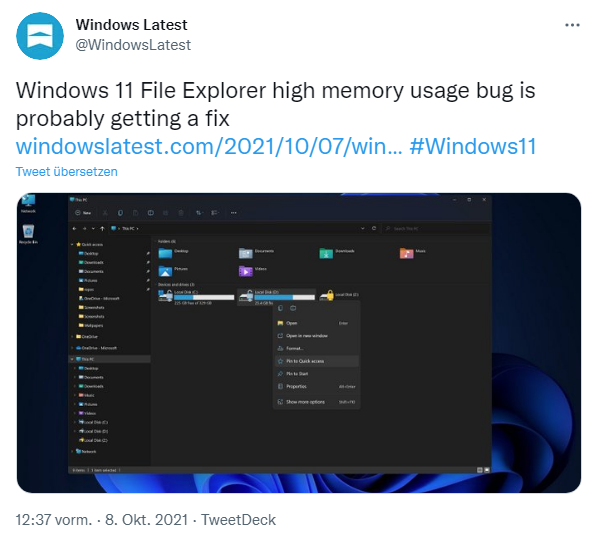 Windows 11's File Explorer is now based on the Windows UI Library (WinUI). This allows Microsoft's developers to provide the file manager with new icons, modern controls, modified buttons and other visual improvements. Not all of these new features are met with enthusiasm by users, as some displays from the old Windows 10 file manager are lost.

The Windows 11 File Manager uses the Mica design (see this Microsoft post mentioning Mica material for transparent display) for the window's command bar/header. The Explorer context menu has also been updated to use the Fluent design. These are all changes to visually align Explorer with the new UI. It is these GUI and design elements that are probably responsible for the high memory usage/memory leak.

There are user reports that have observed resource usage by Explorer in Task Manager with peaks of 70-99%. In some cases, Explorer is constantly hogging the device's processor – and there are also reports of crashes due to this memory usage. Windows Latest is now speculating that Microsoft's Windows 11 Build 22454 announcements could promise to remedy the situation. The blog post in question contains the hint:

Those are two items related to fixes in Explorer, where it says "Some issues that caused leaks when using File Explorer have been fixed." However, it seems that the whole thing is not really in the bag yet – as the memory leaks continue to be reported.

The build 22454 mentioned above was released in the Dev Channel, so it hasn't made it into the rolled out Windows 11 branch yet. Windows Latest writes that Microsoft will surely roll out this solution to Windows 11 users soon. Next week Tuesday (12.10.201) is patchday again. Maybe a fix will come then. Anyone affected by this memory leak?