[German]This night (October 5, 2021), Microsoft released its Windows 11 as scheduled, so that interested users can install and test this operating system on suitable hardware. Due to the hardware requirements, only a manageable number of systems will be fully compatible with Windows 11. I'll summarize the current status in the following.

Microsoft Windows  boss Panos Panay has already given the starting signal for the release of Windows 11 on October 4, 2021 with the blog post Windows 11: A new era for the PC begins today, all the "great things" you can do with Windows 11 and why it needs lots of new PCs.

No need to rush …

Those who are running Windows 10 will still get support and security updates until October 14, 2025. And under the hood, this Windows 11 is simply a Windows 10 core, on which some interface elements from the discontinued Windows 10X were taken over (see Plug pulled: The End for Windows 10X …). Malicious tongues could claim that parts of the leftover Windows 10X have been reused in Windows 11.

Moreover, it looks like outside the tech bubble of Windows enthusiasts, this Windows 11 is smoothly passing people by the thing that's in their pants. The days I had read on Neowin.net the result of a survey among 1,042 adult US PC users. There 62% of the people stated that they had not heard of this new operating system yet. Even though the number of users in the survey was low, the result should be representative. From the remaining users, only a few are currently planning to switch immediately.

The problem is the hardware requirements from Microsoft for Windows 11 devices. Windows 11, which will only be available as a 64-bit operating system, has a minimum hardware requirement of 4 GB of RAM, 64 GB of storage space, UEFI Secure Boot and TPM 2.0. In addition, there are further specifications for certain functions like Windows Hello login or to the graphics output. Maybe I will go into details (also why only the newest CPUs are quoted as compatible) in further articles here in the blog.

Who wants to upgrade

If you still want to switch from Windows 10 to Windows 11, you officially need a compatible system. Then Windows 11 will be offered as a feature update in the settings and Windows Update at some point (possibly just before the end of the year). The other option is to officially obtain Windows 11 via this Microsoft page (but during the time of writing, I could not access this site – got Gateway timout from time to time). 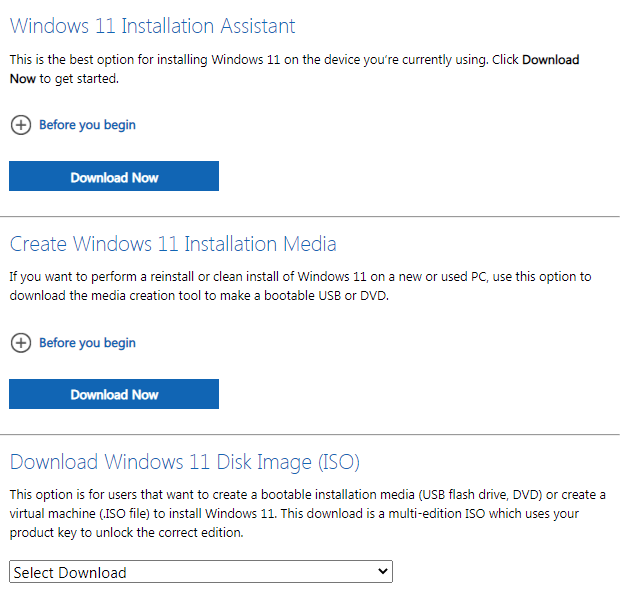 An installation wizard for Windows 11 can be loaded there, which enables an upgrade from Windows 10 to Windows 11 on compatible systems. However, this wizard aborts when an incompatibility is detected.

Alternatively, it is possible to download the Media Creation Tool and then drag Windows 11 as an ISO file onto a USB stick. Then there is a bootable medium, so that Windows 11 can be freshly installed on a machine (but requires a key). In addition, Microsoft offers the possibility on the page linked above to obtain an ISO file directly and bring it to an installation medium yourself.

With a new installation, certain compatibility requirements can be bypassed, whereby one then forgoes an upgrade option. The colleagues from Bleeping Computer describe a script to bypass the TPM check during a new installation. Thus, tinkering enthusiasts can experiment with Windows 11.