[German]I'm going to summarize some of the Windows 11-related news that has come in here. Microsoft has just updated its PC Health app. With this app, users can check if their hardware is ready for a Windows 11 upgrade. Insiders testing Windows 10 in the Release Preview Channel will also get a hint about a possible upgrade if their hardware is compatible. Microsoft also doesn't want to specifically block the installation of Windows 11 on non-compatible systems, but may stop supplying updates. Furthermore, there are rumored dates when Windows 11 could be officially released.

Microsoft had already released its PC Health Check tool on June 24, 2021, right after Windows 11 was unveiled. However, the tool requires Windows 10 version 1803 or later to be installed (see Windows 11 Compatibility tests (PC Health Check, WhyNotWin11)). There was a lot of irritation with the first version of the tool regarding the results.

Now, Microsoft slightly expanded the number of CPU models supported by Windows 11 last week. In the blog post Windows 11: Microsoft specifies hardware requirements, no blocking on incompatible devices, I had mentioned a few days ago that Microsoft would update the PC Health app. 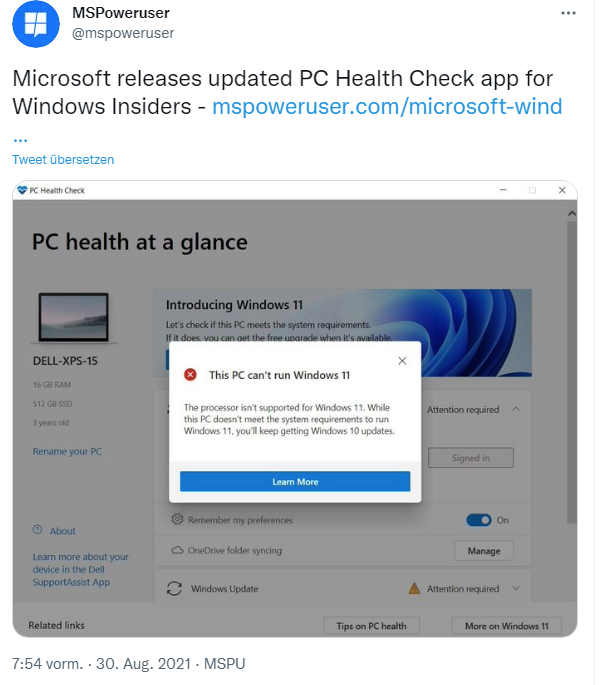 In the above tweet from MSPU you can find the information that this update of the tool is now available (but on the Windows 11 page it still says COMING SOON). For Windows Insiders, however, the Windows Insider Preview PC Health Check Application for various Windows variants can be downloaded in its current version from this page.

Windows Insiders who are in the Release Preview Channel of Windows 10, to test previews there, should get a notice if the system meets the requirements of Windows 11. 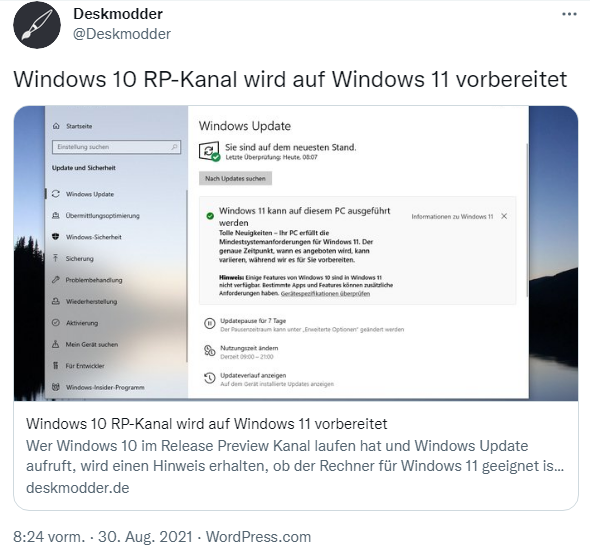 The colleagues from deskmodder.de have just pointed this out in the above tweet. The details can be read in this German post or at Windows Latest.

No updates on incompatible Windows 11 systems

The basis for this information is the article Microsoft won't stop you installing Windows 11 on older PCs from The Verge. They must have had a special briefing by Microsoft, where the information was given that Windows 11 can also be installed on systems with older CPUs, which are not officially supported. Microsoft will only not offer the upgrade from Windows 10 on these machines and also advises users not to upgrade these systems to Windows 11 via a fresh install.

After Tom Warren published the above article at The Verge, Microsoft got back to him and advised that such systems running Windows 11 may not receive updates or driver updates in the future. Warren states that it is unclear if Microsoft is just protecting itself legally or if they want to prevent users from upgrading.

The only thing that comes to mind is Clover Trail in connection with Windows 10. Systems with Clover Tail were released with Windows 8.x and could be updated to Windows 10 RTM. But then it turned out that the installation of the Windows 10 Creators Update (version 1607) did not work. The reason was that Intel no longer supplied a Windows 10 driver for the GPU integrated on the chipset (see my German blog post Warum gibt es das Windows 10 Clover Trail-Problem?). As a result, Microsoft had to announce that they will provide updates for Windows 10 systems based on Intel Clover Trail CPUs until 2023 (see Windows 10 support for Clover Trail machines till 2023). It is possible that they do not want to repeat this mistake.

When will Windows 11 be released?

Microsoft has not yet given a release date for Windows 11, but is talking about the end of 2021. In the blog post Has Intel revealed the October 2021 release date and name for Windows 11? I had once mentioned October 2021. However, in this comment EP left a link to this article. There it says that the RTM status of Windows 11 could be reached as early as September 2021, so the general release will be on October 19, 2021 (source for this date is Zack Bowden). However, I confess that the release date doesn't really concern me anymore, given the above hiccups about the hardware requirements for Windows 11 and the gimmicks on the GUI.