[German]That's it for Windows 11 – at least with older hardware, if I'm right. If the hardware requirements already caused head shaking and unstoppable enthusiasts were looking for ways to install the operating system on machines that did not meet the requirements, this will now be blocked. In the latest Insider Build, Microsoft makes a TPM 2.0 and secure boot mandatory for virtual machines to run Windows 11. 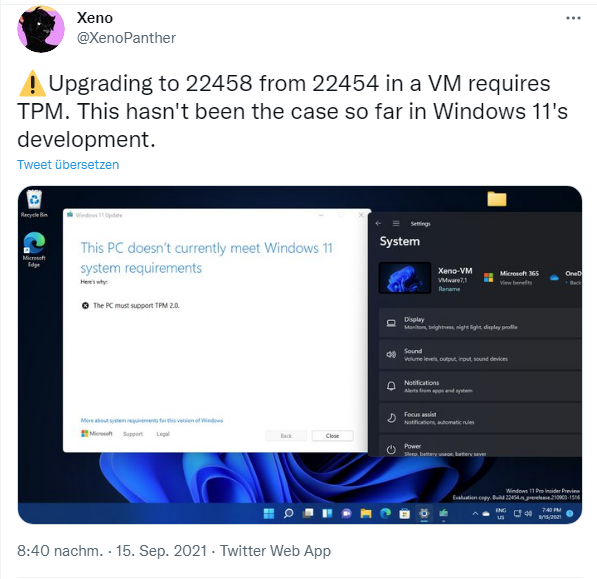 This build includes a change that aligns the enforcement of the Windows 11 system requirements on Virtual Machines (VMs) to be the same as it is for physical PCs. Previously created VMs running Insider Preview builds may not update to the latest preview builds. In Hyper-V, VMs need to be created as a Generation 2 VM. Running Windows 11 in VMs in other virtualization products from vendors such as VMware and Oracle will continue to work as long as the hardware requirements are met. For more details on the Windows 11 system requirements – see this blog post here.

In a nutshell: Virtual machines also need the same hardware requirements as bare metal instances. This also includes support for TPM 2.0. Microsoft is already making 2nd generation VMs mandatory for Hyper-V. The hypervisors from VMware and Oracle Virtualbox should still work as long as the Windows 11 hardware requirements are met. 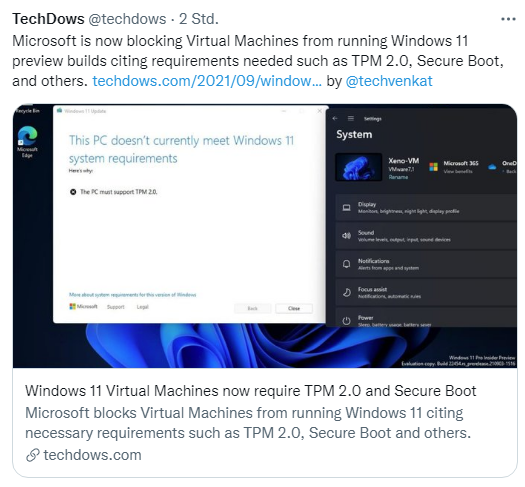 I had already seen it in various tweets throughout the night – the colleagues at Techdows addressed it in the above tweet and in this article. Without TPM 2.0 and Secure Boot, upgrading a guest with Windows 11 a feature upgrade in virtual machines no longer works. While reinstalling a Windows 11 build in a VM might still work, it doesn't make sense to reinstall your OS every year to get the next feature update. So I have to say, bye, bye, that's it.