[German]Microsoft has announced a new variant of Windows 11 called Windows 11 SE for November 9, 2021. This Windows 11 variant is supposed to be specially designed for low-cost educational PCs and offers optimizations for low-end hardware. I had already speculated about this move by Microsoft a few days ago – which has now been so confirmed.

A low-priced Surface Laptop for the education market has also been developed under the code name Tenjin. The device would feature an all-plastic chassis, a 1,366 x 768 11.6-inch display, an Intel Celeron N4120 processor and up to 8GB of RAM. The price range for these devices including Windows 11 SE is said to be $250 US to address the education sector in the US. Windows Central has confirmed this within this article.

I came across Microsoft's announcement in question a few hours ago via the following tweet. The post Teachers use tech to open 'a whole new world' for kids with different needs is actually about the needs of kids with impairments. 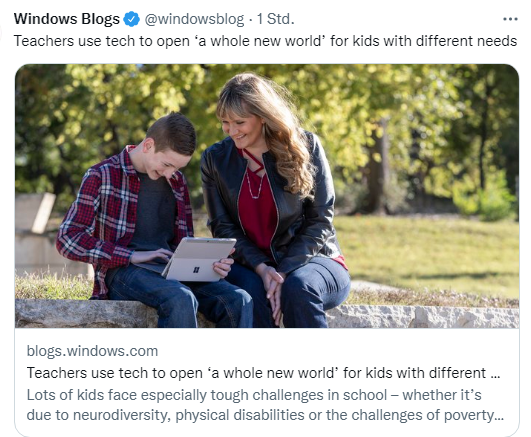 But there's a note there that the new edition of the Windows 11 operating system unveiled Tuesday, Windows 11 SE, and the lower-cost devices it supports, such as the Surface Laptop SE and others from Microsoft partners, fit into a suite of learning technologies designed to help educators give students the personalized support they need.

More details can be found on the page Windows 11 SE for Education,  though you'll have to dig a lot of information together.

Microsoft has already summarized what to expect in a FAQ (PDF). Windows Central has confirmed the essential data in this article. During the development of Windows 11 SE, feedback from teachers and IT administrators in schools was taken into account. Windows 11 SE comes on devices that already have Microsoft Office (Word, PowerPoint, Excel, OneNote and OneDrive) pre-installed. The programs can also be used offline as part of a Microsoft 365 license.

Windows 11 SE automatically runs applications in full-screen mode because most Windows 11 SE PCs are expected to have small 11-inch displays. Microsoft has limited some of the multitasking features, according to Windows Central. This includes a reduction in the number of apps that can be displayed on the screen at the same time: It should only be possible to display two apps next to each other. The Microsoft Store app is also disabled.

In addition, access to the "This PC" section in File Explorer is removed by default. The argument is that most students don't need to access this area when working on schoolwork. Regarding Windows 11 SE's "cloud-backed" term, all locally stored documents are mirrored to the cloud.

Windows 11 SE was designed with Windows Autopilot management in mind. Intune for Education provides a cloud management solution that allows IT administrators to deploy and manage Windows 11 SE PCs. Windows 11 SE devices are also said to be automatically updated. Policies can be used to specify that these updates should only take place outside of classroom hours.

Microsoft announced that there would be an ecosystem of Windows 11 SE PCs that will include its own Surface Laptop SE as well as PCs from Acer, ASUS, Dell, Dynabook, Fujitsu, HP, JK-IP, Lenovo and Positivo. Windows Central reported on the announcement of a $249 Surface Laptop SE in this article. Let's see how successful the whole thing will be in the US.

This entry was posted in devices, Windows and tagged Surface, Windows 11 SE. Bookmark the permalink.