Windows attacks via 0-day in installer and vulnerability in MSHTML

[German]Attackers are exploiting a now-patched CVE-2021-40444 vulnerability in Microsoft's MSHTML routines to attack Windows systems. And the 0-day vulnerability in Windows Installer that I addressed here on the blog the other days is being exploited by malware for privilege escalation. Here's an overview of the threats to Windows users via these two rails.

Microsoft also assessed the vulnerability as low in its threat level (base CVSS score 5.5, temporary score 4.8) because the attacker must already be running an application locally on the system. However, the whole thing becomes a problem because the security researcher has found a workaround, the patch is ineffective. All Windows versions are affected, including Windows 10, the brand new Windows 11 and all Windows Server versions.

This info stealer is also used to monitor the Telegram platform and collect system information from compromised devices. The information, along with stolen credentials, is sent to servers controlled by the attackers, as Bleeping Computer colleagues write here.

This has been spread since July 2021 via spear phishing emails targeting Windows users with the RCE vulnerability CVE-2021-40444 in Microsoft MSHTML unpatched via compromised Word documents.

MSHTML (Trident) is the HTML rendering engine of Internet Explorer included in all previous versions of Windows. It is known that attackers have used manipulated Office documents to attack the vulnerability in the HTML rendering engine via ActiveX components downloaded from attacker websites and reinstalled. I have published a couple of posts on this vulnerability here on the blog (see the list of links at the end of the article).

As of September 14, 2021, Microsoft then released a patch for the CVE-2021-40444 vulnerability and shipped it with the Windows cumulative updates that include Internet Explorer and the Internet Explorer 11 cumulative update KB5005563, dated 9/14/2021. The problem is that Microsoft's security updates do not apply to older Windows 10 versions. ACROS Security therefore provides 0patch solutions to secure Windows against the MSHTML vulnerability (CVE-2021-40444). I had addressed this in the blog postWindows 10: 0patch fix for MSHTML vulnerability (CVE-2021-40444). 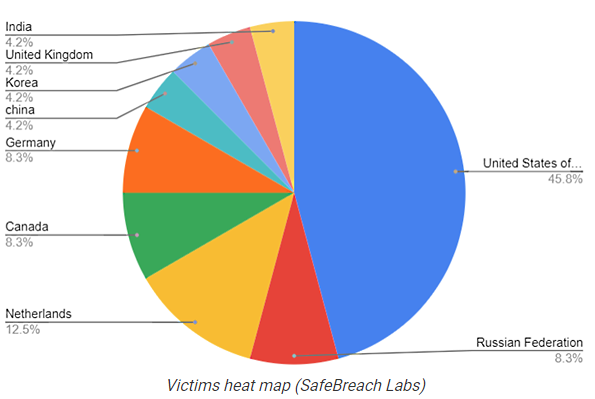 Now most of my blog readership will not be part of the Farsi-speaking population with Iranian roots. But the colleagues at Bleeping Computer have published the above graph, based on the very detailed SafeBreach report New PowerShortShell Stealer Exploits Recent Microsoft MSHTML Vulnerability to Spy on Farsi Speakers. The majority of victims are found in the US – but still 8.3% were detected in Germany. And the Netherlands is also doing well with 12.5%.

There is another aspect to the story: the RCE vulnerability CVE-2021-40444 in IE's MSTHML rendering engine has been exploited in the wild as a zero-day since August 18, 2021. Attackers thus exploited the vulnerability more than two weeks before Microsoft issued a security advisory with a partial workaround and three weeks before a patch was released.

Microsoft states that multiple threat actors (including ransomware offshoots) targeted this vulnerability using specially crafted Office documents distributed via phishing attacks. It involved a campaign that exploited the vulnerability by distributing custom Cobalt Strike beacon loaders. Bleeping Computer colleagues state that the vulnerability was most recently exploited by the Magniber ransomware group. Thus, the risk of an unpatched MSHTML library mutating into a gateway for malware is real.