[German]The Swiss Armed Forces has banned its military personnel from using messengers like WhatsApp while on duty. Instead, all army personnel are to use the Swiss messaging app for official business. The decision was made for security reasons in order to comply with data protection. The costs will be borne by the army.

The decision in favor of Threema seems to have been made as early as the end of 2021, because the following tweet is from the end of 2021. However, the whole thing only became more widely known now. 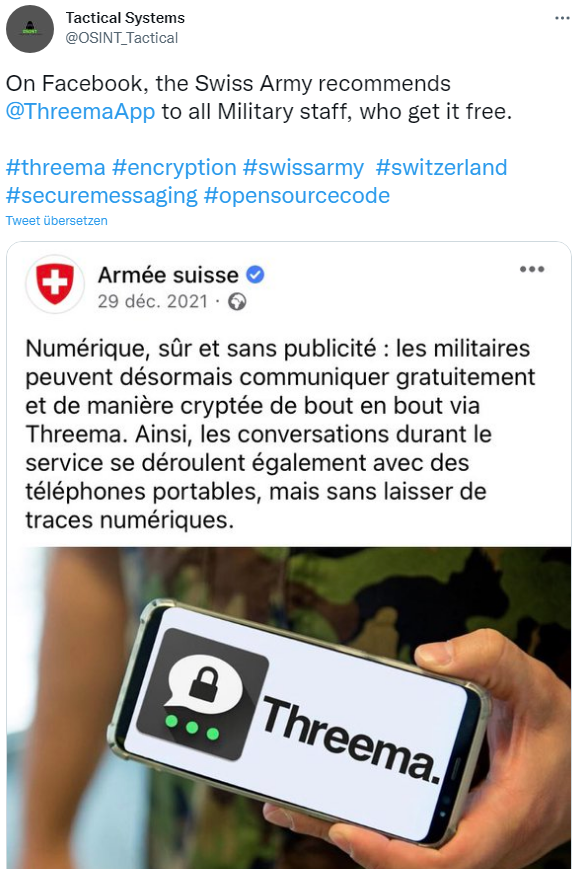 Swiss-Info picked up the information in this post on January 5, 2022. The decision of the army leadership is that army members should in future exclusively use the Swiss messaging app Threema while on duty for security reasons. All other short messaging services will no longer be allowed.

The army staff probably instructed all commanders and chiefs of staff by mail at the end of December 2021 to use the messenger app Threema in the future for on-duty communication with private smartphones. The letter, from which the Tagesanzeiger quotes, says: "All other services are no longer permitted." Thus, in the future, the army will prohibit its members from exchanging information with each other via Whatsapp, Signal or Telegram and disseminating official instructions via these channels. To heise online, Swiss army spokesman Daniel Reist explained:

We can't force anyone to download Threema onto their personal device. In the future, every member of the army will be able to use the messenger service he or she wants for private use. But official messages should indeed be handled via Threema in the future.

The background is privacy and security concerns. In January 2021, the FBI had revealed in a document which metadata can be retrieved from messenger services even with end-to-end encryption. According to Spiegel Online, the Army leadership also justifies the default by saying that Threema is compliant with the European General Data Protection Regulation and is not subject to the Cloud Act. This ensures that American authorities no longer have access to data held online by US companies. Threema doesn't even require a phone number to communicate, but it does charge a fee. The army, however, wants to cover the costs for army personnel.

This entry was posted in Security, Software and tagged Threema, WhatsApp. Bookmark the permalink.