[German]The security and antivirus solution Norton 360 installing a crypto miner on the user's Windows system. Although this can be controlled by the user, it is (in a time we are facing climate change) still questionable. I have become aware of this case on Twitter a couple of day ago. Symantec have had documented it within a FAQ published in the Norton community.

There are a lot of fans of Norton antivirus products out there – at least that's my impression from the time when I was still a regular community moderator in forums like Microsoft Answers. I'm familiar with the packages as "trouble makers" on Windows, but whatever. People love these software packages because they are supposedly more secure. Among insiders, many consumer-grade security and antivirus packages tend to rank below "snake oil" (cost, it's promised a lot, but strictly speaking, it doesn't help).

The market for antivirus and security solutions – at least in the consumer sector – can be seen as difficult. The companies have problems to finance themselves. Thus one reads everywhere about takeovers of the provider XYZ by the company abc. The Symantec brand was sold to vendor Broadcom years ago for US $10.7 billion. At the end of 2019, the acquisition of Symantec.

At that time, it was stated that the new NortonLifeLock brand would continue to become/remain a globally recognized leader in consumer and small business cybersecurity. Since that time there has been massive anger with customers – I just remember the inability to renew licenses (see Symantec acquisition by Broadcom ends in license/support chaos). I stopped following it from then on.

The days I came across the following tweet by Cory Doctorow, indicating that Norton 360 will have a Kypto miner installed and the manufacturer will get a commission for crypto money mined. 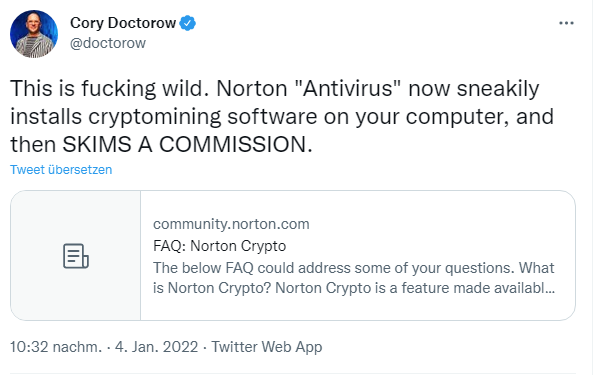 The company also documents this in theFAQ: Norton Crypto published on July 20, 2021. On January 5, 2022, this FAQ was updated. Norton Crypto is a feature of Norton 360 that allows users to mine Etherum cryptocurrency with an idle system. Currently, Norton Crypto is limited to users with devices that meet the system requirements required in the FAQ.

Each user can control whether or not they want to use the miner on Norton 360. However, Norton creates a digital Ethereum wallet for each user as a precaution and stores the whole thing "securely in the cloud". The whole thing is transparently documented by the provider, so there is no reason for reproach here.

However, the whole thing still has a negative touch – because cypto-mining is heavily criticized due to the energy consumed, and countries like China have issued a ban. Currently, countries are also blocking crypto-mining due to energy shortages. When Norton 360 now rolls out a crypto-miner on its platforms, it at least leaves the impression that people don't really care about issues like global warming.

This entry was posted in Security, Software, Windows and tagged Antivirus, Security, Windows. Bookmark the permalink.