[German]I'll pull it out separately as a blog post. Administrators of Windows Domain Controllers should be careful about installing the January 2022 security updates. I have now received numerous reports that Windows servers acting as domain controllers will not boot afterwards. Lsass.exe (or wininit.exe) triggers a blue screen with the stop error 0xc0000005. It can hit all Windows Server versions that act as domain controllers, according to my estimation.

However, something seems to have gone wrong, because the security update can trigger a boot loop on Windows servers that act as domain controllers.

I want to advise against rolling back snapshots, especially on DC's, so as not to provoke USN rollbacks.

Workaround: prevent one of the two DC's from booting, then uninstall today's hotfixes first on one and then on the other DC.

In the comments of my blog post above (and its German counterpart), other blog readers confirm this problem. The workaround is, to uninstall the January 11, 2022 security update.

German blog reader MOM20xx had the boot loop even after uninstalling the update and notes that the security-only update KB5009595 should also be uninstalled on the domain controllers.

German blog reader Simon wrote in this comment that it also affects Windows Server 2016/2019 Domain Controllers too. He then posted the following dump excerpt.

The process wininit.exe has initiated the restart of computer DC on behalf of user for the following reason: No title for this reason could be found
Reason Code: 0x50006
Shutdown Type: restart
Comment: The system process 'C:\Windows\system32\lsass.exe' terminated unexpectedly with status code -1073741819. The system will now shut down and restart.

So there wininit.exe triggers the error 0xc0000005 on the domain controller. I also have another feedback on Facebook that update KB5008873 on Windows Server 2019 is causing the restart of the AD controllers (the AD controller is restarted every 15 minutes). 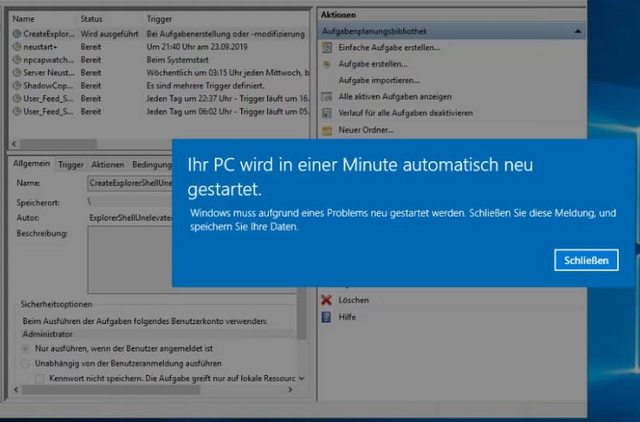 If anyone needs some more hints on how to uninstall the update in a Windows PE environment, I'll refer them to How to Remove Updates from Windows Recovery Environment (WinRE).

Note: According to this German comment, update KB5009543 causes problems with L2TP VPNs. On reddit.com there is this thread about it. See also the links below.

In addition, I got reports that VMs on Server 2012 R2 Hypervisor do not start anymore. The error message is that the hypervisor is not running: Hypervisor launch failed; The operating systems boot loader failed with error 0xC00000BB. This is probably update KB5009624 for Server 2012 R2 – just as a hint, if there should be problems under Windows Server 2016 – 2019. See also the links below.

And we have reports, that the Windows Server 2012 R2 January 11, 2022 security update removes ReFS support.