[German]The security updates Microsoft released on April 12, 2022, has closed numerous vulnerabilities. In particular, the vulnerability CVE-2022-26809 is security-critical and should be patched promptly. The password loop caused by the March 2022 preview updates has also been fixed. But there are also issues: Remote Desktop Gateway roles on Windows Server 2022 break, Edge or Chrome may fail to start in Windows 11, and there are installation errors in Windows Server 2012 (caused by antivirus solutions).

Update KB5012592 for Windows 11 causes Google Chrome and Edge browsers to stop launching and issues error code 0xc0000022. Blog reader EP points out this issue in this comment, which Windows Latest claims in this post for the April 2022 updates for Windows 10 and Windows 11.

The issue doesn't affect very many users. The cause is probably compatibility issues between the updates for Windows 10/11 and antivirus solutions from ESET, which can cause app crashes. According to the Windows Latest article, ESET is working on this problem, but manual user intervention may still be required.

In this German comment blog reader Goran reports that Sophos antivirus solution is blocking the installation of the patches on Windows Server 2012. His statement: the patches are not installed until you install Services:

to manual, stop and restart after reboot. Maybe it will help one or the other affected person.

The preview update KB5011551, released on March 22, 2022, causes a password loop on Windows Server 2019 for some people. Users are prompted to reset their (expired) password, but were unable to make this password change. I had picked this up in the blog post Windows Server 2019: Update KB5011551 causes password loop. There, are came further confirmations by other administrators in these comments.

The problem seems to have affected all versions of Windows, because Microsoft has actually mentioned in the descriptions of all Windows updates from April 12, 2022 that the password entry problem has been fixed.

Microsoft has addressed the vulnerability in security updates. Since the attack occurs through TCP port 445, Microsoft suggests blocking this port in the network's corporate firewall to protect systems located behind it from attacks. Colleagues at Bleeping Computer also take up the issue. By the way, Akamai has published a blog post with more details, as the following tweet reveals. 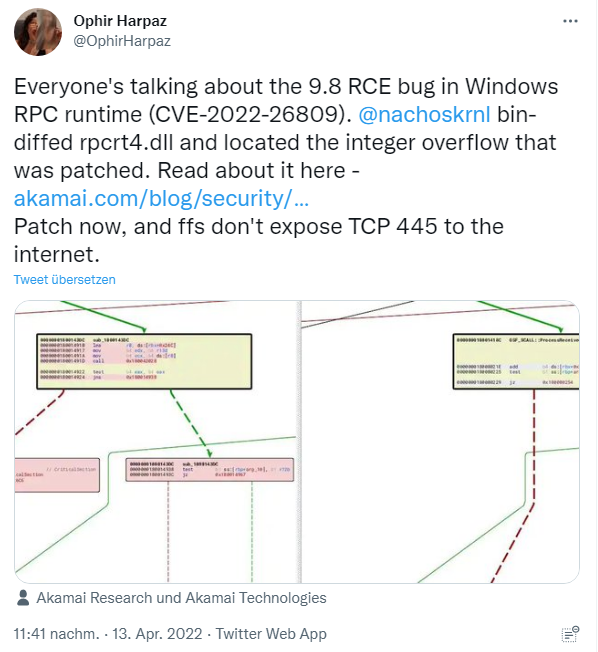