[German]Microsoft has announced the general availability of Defender for Business as of May 2, 2022. It is a standalone endpoint antivirus protection solution for small and medium-sized businesses. So, the solution goes beyond the Windows-integrated Defender in functionality, providing malware, phishing and ransomware protection on Android, macOS, iOS and Windows.

The following tweet points to this document, where Microsoft describes the new products for small and medium enterprises (SMBs). 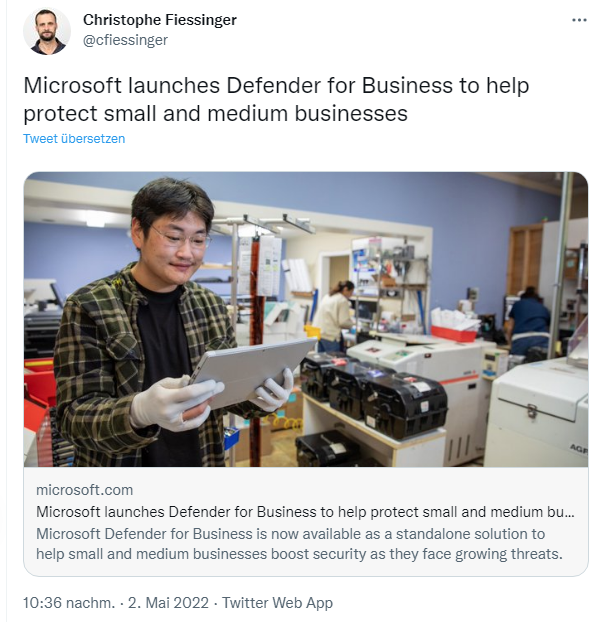 Microsoft surveyed more than 150 small and medium-sized businesses (SMBs) in the United States in April 2022 to better understand changing security needs. More than 70 percent of SMBs said cyber threats are becoming more of a business risk. Nearly one in four SMBs has been affected by a security breach in the past year.

SMBs often lack access to the right resources and tools. Many of these businesses still rely on traditional antivirus solutions for their security. Although 80 percent of SMBs say they have some type of antivirus solution, 93 percent remain concerned about increasing and evolving cyberattacks, with phishing, ransomware and data protection topping the list.

Plans in the area of security for small and medium-sized businesses were unveiled back at Microsoft Ignite. As of May 2, 2022, Microsoft has announced the general availability of the standalone version of Microsoft Defender for Business. Defender for Business provides SMBs with enterprise-grade endpoint security, including endpoint detection and response (EDR) capabilities, with the ease of use and pricing tailored to small businesses and their partners, Microsoft said.

In addition to the article here, a Techcommunity article on Defender for Business was also published. This solution is likely to be sold also via partners – Microsoft quoted $3 per user per month as the price of the software.

What's important is the limit of 300 users (so it fits only for SMBs) and the limit of 5 devices per user on which Defender for Business can be used (as you can read in this FAQ).

This entry was posted in Android, macOS, Security, Windows and tagged Defender, Security. Bookmark the permalink.