[German]Anonymous sources reported to Bloomberg, Apple is testing future iPhone models that replace the current Lightning charging port with the more widespread USB-C port. This would be an absolute paradigm shift for Apple and its customers.

The information was likely revealed by insiders familiar with the development – the original article can be found on Bloomberg. The following tweet points to the Bloomberg article. 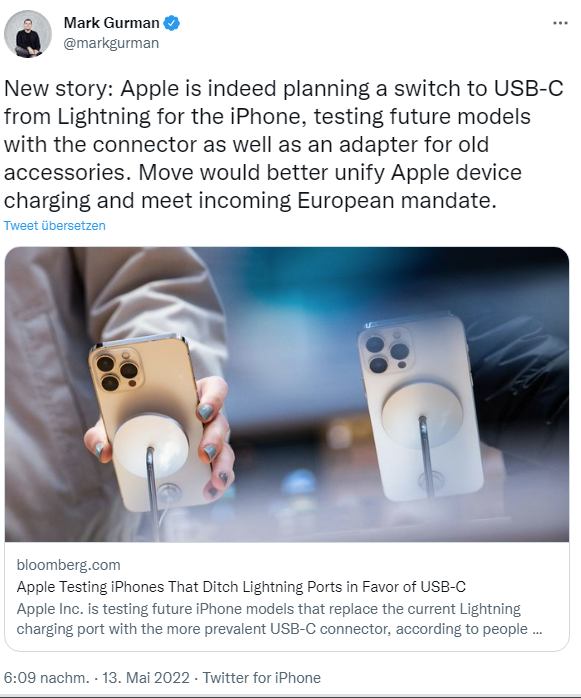 The move is necessary if Apple wants to comply with the looming European regulations on the unified charging interface. That's because the EU Commission had sent a directive to that effect to the European Parliament, declaring USB-C (see photo) the standard connector for all smartphones, tablets, cameras, headphones, portable speakers and portable video game consoles. I had reported about it in the blog post European Commission proposes a common charger for electronic devices.

I had indeed recently pointed out in the article USB-C as a uniform standard for charging cable is coming in Europe that a uniform charging interface based on USB-C in the European Union (EU) is coming. The Internal Market and Consumer Protection Committee (IMCO) of the EU Parliament had approved the corresponding draft resolution of the EU Commission in April 2022. Now only the approval of the EU member states is required so that the whole thing will then be considered mandatory (possibly from summer).

However, Apple or its customers run into another problem: There are accessories with a Lightning port, which would then be obsolete for new iPhone models with a USB-C charging interface. However, it is said that Apple has not only tested new iPhone models with a USB-C port in recent months. But Apple is probably also working on an adapter that will allow future iPhones to be used with accessories for the current Lightning connector, according to people who have insight into the development but wish to remain anonymous.

So my guess in the posts above that Apple could then emerge as the biggest loser from this story doesn't seem to be coming true – unless Apple doesn't swing around after all. So nothing definite is known. It remains to be seen whether Apple will fully commit to USB-C. That will probably not be the case before 2023. It would also be conceivable to offer different models for different regions (as an iPhone EU edition with USB-C, the rest with Lightning).

This entry was posted in devices, ios and tagged iPhone. Bookmark the permalink.