WSUS chaos: Preview updates for Windows and Net withdrawn as superseded on 9/21/2022

[German]Small addendum from this week. Microsoft had released several preview updates for Windows 10, Windows 11 and Windows Server 2019/2022 as well as .NET Framework on September 20, 2022. However, it looks like Microsoft withdrew these updates from WSUS (and also in ConfigMgr) as Superseded shortly after they were released back on September 21, 2022. Addendum: Microsoft has now confirmed the issue.

In addition, blog readers reported other preview updates for .NET frameworks in the German comments here.

An anonymous German blog reader reached out in this comment to report preview updates for the .NET Framework suddenly showing up at his WSUS on the morning of Sept. 21, 2022.

The user was surprised that this happened, because there are no preview categories unlocked on WSUS. Then at noon came the addendum that these updates had been recalled. In another comment thread René reports here (I've translated the German comments):

2 preview updates for .Net are also still there….

Do you guys have this as well? All updates were released yesterday on 09/20….

@ Günter: I guess these are not Insider Channel updates anymore, or is WSUS going crazy again? thx.

Can anyone confirm this ?

M. Winkler then states in a follow up comment that the updates disappeared after a synchronization of WSUS.

the KB5017380 did not fix the problem either. After resynchronizing the WSUS server, the update has been rolled back..

and Rene' writes in the same thread:

Seems to be total chaos at Microsoft again – at least when it comes to providing preview updates for WSUS. User MOM20xx brings it to the point in this comment:

Now it's getting bad. Since today preview updates for various Windows and .NET versions in WSUS. Classified as updates. Are they thinking something? Why don't they make their own classification preview?

Other administrators confirm in follow-up comments the observations that preview updates do not show up as preview on WSUS (see also this comment thread opened by Gregor). And 1ST1 mentions here that Windows Server 2012 R2 reports a 96kb update KB3172729 from April 8, 2021 as newly available. So Microsoft seems to have big problems with its infrastructure again.

In addition, I refer at this point to my blog post Windows 10 22H2: Already distributed via WSUS in August 2022; Clients no longer find updates. In August 2022, some WSUS administrators seem to have received the upgrade to Windows 10 22H2 for their clients (without it being released). Now clients can no longer pull September 2022 updates because version 22H2 has not yet been released.

There are a number of posts on patchmanagement.org since September 21, 2022 dealing with preview updates withdrawn at WSUS – here is a screenshot of the posts. 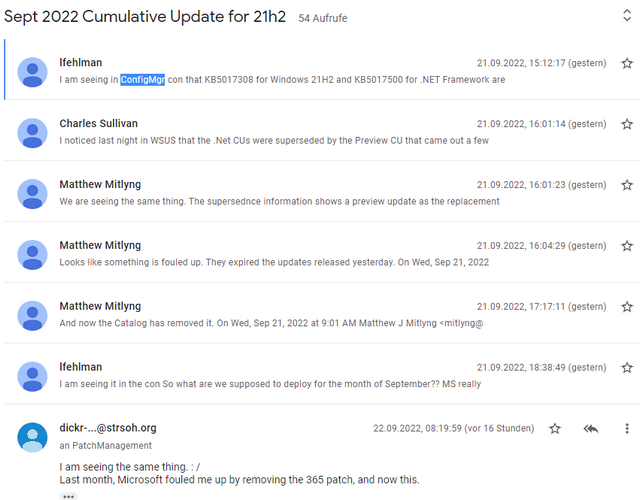 lfehlman writes on the mailing list: I am seeing in ConfigMgr con that KB5017308 for Windows 21H2 and KB5017500 for .NET Framework are Superseded? Are there updated cumulatives in place that anyone is aware of? and posted the following screenshot.

And another user writes:

I noticed last night in WSUS that the .Net CUs were superseded by the Preview CU that came out a few days ago. Not sure if that's a new thing or if previews have always superseded the Patch Tuesday CU. I found it kind of annoying. A preview should very much be optional, so it seems to me that it shouldn't supersede anything.

Another user states that the updates have also been removed from the Microsoft Update Catalog.

Microsoft says it's an error

Addendum: Microsoft has now confirmed the issue on the Windows Health status page of Windows Server 2022. Since September 22, 2022, there is a post The September 2022 preview release is listed in Windows Server Update Services that sheds some light on the matter. Microsoft writes about it:

IT administrators who utilize Windows Server Update Services (WSUS) might notice that the Windows September 2022 preview update, known as the 'C' release, is listed among the updates available from WSUS. This listing is an error. Preview updates are generally available for manual importing via the Microsoft Update Catalog and Windows Updates.

This issue may also affect the installation of the September 2022 Cumulative Update Preview for .NET Framework, which is also available through Windows Update and the Microsoft Update Catalog.

This listing is an error.

The Windows September 2022 preview release has been removed from WSUS and Microsoft is working on a solution to help customers who accidentally imported updates through WSUS. Microsoft expects a solution to be available in the next few days.