[German]Small addendum to a problem of the last 14 days. Users of Windows 10 and Windows 11 may suffer from the fact that the taskbar does not work anymore. Especially from the business sector I know of some reports. Cause can be among other things the application ClickShare from Barco – I had reported about it. Now Microsoft has confirmed the problem and given some hints.

Since January 18, 2023, reports of Windows 10 and Windows 11 users experiencing problems with the Windows shell have been accumulating. These range from a unresponsive taskbar to Office applications not starting and other errors. In some cases, systems managed via Intune are also involved. But Barco have had published a knowledge base article, that their Clickshar app and its calendar integration may trigger issues (see my blog post Windows 10: Taskbar and Office apps suddenly broken (Jan. 18, 2023)).

The error can occur when a 32-bit third-party process (such as ClickShare) uses Office APIs on a computer where Office is deployed with Office ClickToRun. There is an error in the registry hook of AppvIsvSubsystem32.dll. In this case, profapi.dll starts to restore the ACLs, but after a second error, the ACLs for all application packages are no longer written. The registry entries for the component are then broken, which causes problems (crashes and registry errors) with packaged applications.

According to MVP Rudy Ooms, Microsoft has internally created a bug record 41322218 RecoverUserShellFolderKeys fails to restore default permissions for this, and the whole thing is said to be related to a version of Office Click-to-Run. According to Ooms, Microsoft is probably working internally to fix the above bugs in the DLLs. The release could be published in March 2023 with a KB number of the Windows10.0-KB900259-x64 type.

I don't have access to Microsoft's internal bug records. But the night I stumbled across the following tweet from Rudy Ooms, which makes a statement about Microsoft documenting this. 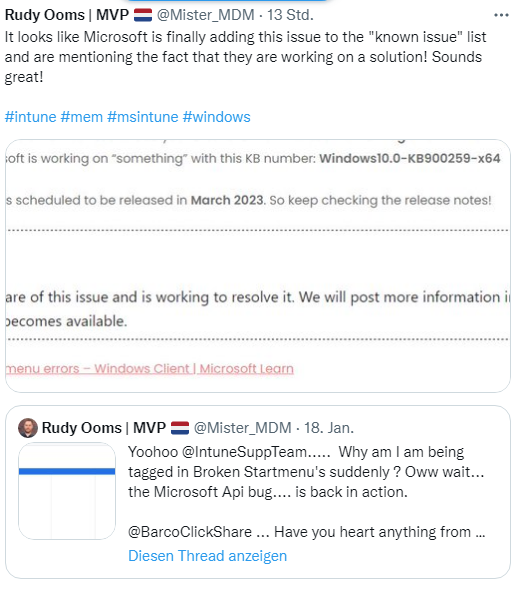 He didn't link to a source, so I then did some searching – but found nothing in the Windows 10 Status Health dashboard (there's the Application shortcuts might not work from the Start menu or other locations dated January 18, 2023 the last entry at Windows 10 22H2). But then I came across the Start menu troubleshooting guidance support post, which was last updated on January 22, 2023. And there you can find the following entry: 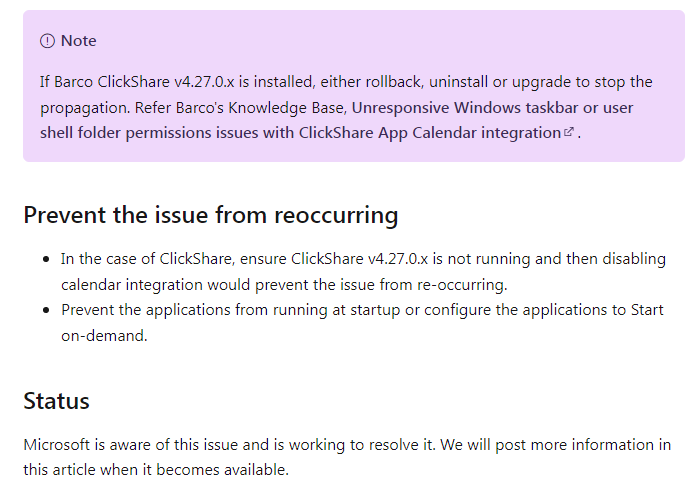 Prevent the issue from reoccurring

Microsoft is aware of this issue and is working to resolve it. We will post more information in this article when it becomes available.

So it is confirmed that there are problems with Barco ClickShare v4.27.0.x on Windows 10 and Windows 11. Affected users should disable calendar integration in this ClickShare version. Microsoft is aware of the issue and is working to fix it.

Notes: The problem is not new, I had already reported about it in the summer of 2022 in the post Windows 10: Barco ClickShare breaks start menu, OneDrive, Outlook and Store apps. It is also important to understand that while the problem is clustered with Barco ClickShare v4.27.0.x on Windows 10. But Windows 11 is also affected and the bug can be caused by other third-party applications that access the Office API from calendar functions. The only thing left to do is hope for Microsoft's fix, and until then, disable the calendar functions of the affected applications. Fixes for the broken registry entry in the form of PowerShell scripts I have linked to in the blog post Windows 10: Taskbar and Office apps suddenly broken (Jan. 18, 2023) and in my German blog post Neues zu Windows 10/11 Taskleisten- und Intune-Problemen (Barco ClickShare, 18. Jan. 2023).

Addendum: Microsoft has added the know issue Start menu, Windows Search and UWP apps might have issues opening to the health status page of Windows 10 and 11.