[German]In connection with the latest Windows updates there is (possibly) a problem with Internet Explorer 11 that can cause crashes. In my opinion, this problem occurs in all versions of Windows and it's available since September 2017 patchday.

I just publish the information within this blog. Perhaps other users can confirm this issue with Internet Explorer.

The first message about that issue

Recently I found a short post from Woody Leonhard at Askwoody.com. Woody had received a user mail claiming issues with Internet Explorer 11.

Have you heard of or seen an issue with Internet Explorer 11 crashing when the cumulative update for the Win 7 OS KB4048957 is installed? (not the IE patch mind you – the OS cumulative patch. Weird right?)

We are seeing this on some Windows 7 x64 machines. Uninstalling the patch appears to resolve this as an interim fix. (Obviously not a long term fix as the patch is cumulative – but helpful workaround to buy time for now.)

Initial indicators with a case we have open with Microsoft indicates if a registry key is removed this also fixes it (ironically, the removal also causes other issues so not a vector for the fix)

I've mentioned this issue within my German blog post November 2017: Patchday-Überraschungen (WSUS, IE …) and have asked my blog readers, it somebody can confirm this. Till now I haven't received a confirmation.

There has been something with 'Known Issues' …

After reading the post at askwoody.com and another post about Internet Explorer 11 crashes, in combination with icon font size in Windows 7 and Windows 8.1 I remembered something. Documenting the patchday updates I 've read something about know issues. Searching my blog brought me to the article Windows 10: Updates KB4041688, KB4043961 (10/17/2017). I wrote about Update KB4041688 for Windows 10 Anniversary Update (V1607). I mentioned the known issue:

Some users who have the text size for icons set to a larger size (using Display Settings in Control Panel) may have issues launching Internet Explorer.

Microsoft provides a workaround within the KB article:

Reducing the text size for icons to a smaller value or using the Change the size of all items setting should alleviate this issue.

Microsoft wrote, that they are working on a solution and intend to ship it with one of the upcoming updates. I've searched the Internet for recent updates and came across the following patches mentions the above IE 11 issue.

The issue is also contained within updates released in the following months (see for example KB4041691).

Changes in Internet Explorer 11 in September

On the patchday on September 12,2017, Microsoft also changed Internet Explorer 11 via updates. I've addressed this within my blog post Internet Explorer 11: Hide search box. The screen shot below shows what has changed. The upper part shows the old design before September 2017 update. All tabs are shown right of the address bar.

After September 2017 IE11 update, the open tabs are suddenly displayed below the address bar. And the old search box is back, and will be shown right from the address bar (lower part of the above screenshot). Also the context menu of a tab contains a new command Show tabs on a separate row, that switches between the two designs shown in the screenshot above. 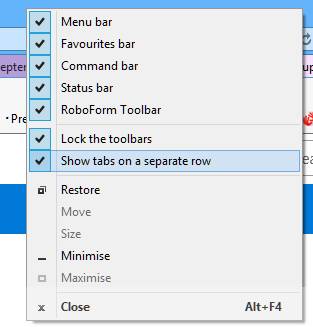 It seems, that this change is causing issues in Internet Explorer 11 now.

Woody Leonhard has published this article at Computer World, describing the problem. The article bases on observations of user @PKCano, who is active within the site AskWoody.com. He has documented his findings here and here.

Microsoft hasn't mentioned this as a known issue at KB4038777. @PKCano investigated a bit more and found out some interesting details. If he unchecked the IE 11 option to show Tabs in a separate row, cumulative update KB4036586 didn't crash Internet Explorer 11. Setting the option to show the tabs within a separate row crashed IE 11. He wrote, that on a retina display with high solution (2880 x 1800) the IE 11 crashed, if:

Woody Leonhard wrote 'If both of those conditions are met, and you install any of the Monthly Rollups for Windows 7 or 8.1 from September onward, it now appears that IE will not start'. Reading my previous text above, indicates, that also Windows 10 builds are affected. You reduce the icon font size in the Control Panel's Display applet. If the value is low enough, IE 11 will start again.